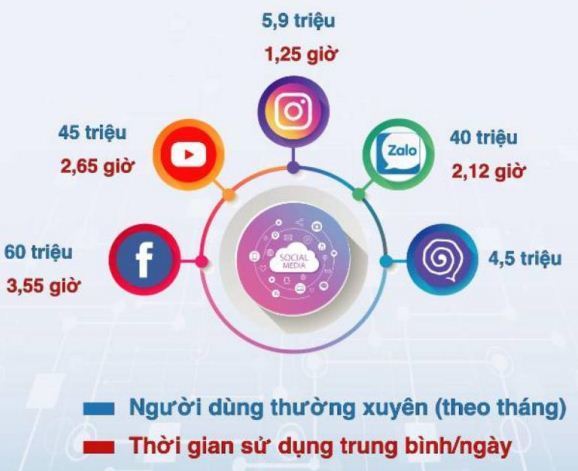 Here’s the brief of Minister of Information and Communications Nguyen Manh Hung’s speech about the development opportunities for Make in Vietnam social networks:

The internet has experienced 15-year cycles. The first cycle, or the first 15 years, was the time for building infrastructure and the foundation of an online world, with big names such as Cisco and Microsoft.

The second cycle of 15 years was the time of mobile phones, social media and platforms, with big names such as Facebook, Google and Apple.

Both cycles had close relations with internet companies, most of them global.

The third cycle from 2015 saw the internet integrated into all parts of human life. New names appeared, not just internet companies. And there was not only content and community, but context as well. A specific context creates specific knowledge and value. A Vietnamese context and a Vietnamese question need a Vietnamese answer.

The third internet wave will be the opportunity for local companies that use global technologies to solve local questions.

The third internet wave needs a new culture – the culture of cooperation. It will not be destruction as replacement as seen in the second wave, but cooperative destruction.

Social networks will also need a new approach. The huge value to be created by the community must not be enjoyed only by platform developers, but must be shared. The community has demand for controlling the rules of the game. They must be the masters of the game, not victims of hidden algorithms.

Platforms can be global, but they need to create sub-platforms to solve questions in specific contexts. And once they are platforms, they must be clean enough to create healthy environments. The things that violate the core value of humanity and violate social morality must be automatically eliminated by the platforms.

And they need to give prominence to cooperation – cooperation with sectors and individuals to create new values on the platforms.

Vietnam’s next-generation social networks must be the products of the third internet wave and follow a new approach – commitment to cooperate, share benefits and create healthy content to spread positive energy, to personalize, to approach with context. The commitments aim to solve new requirements and will be solved with the latest technologies and by enthusiastic developers.

In a business world, where winners can get most of the benefits, there is only one way for the newcomers – having a new different approach which can make a breakthrough.

Any success will expose defects. After one question is solved and demand is satisfied, new demands will appear. New technologies will be invented which will lead to the appearance of new business models, satisfying the new demands of the market and users.

That is why startups will replace giants. And that is evolution. It is an eternal rule. Vietnamese startups should keep this belief to start their business.

Vietnam’s digital technology firms are making investments in a difficult field. They are entering a market which has been dominated by global giants. They are doing something that many other businesses have tried and failed to do, the thing that many people believe is not feasible.

But what if they don’t do this and nobody does?

Vietnam is a latecomer. There is absolutely no easy work for Vietnam’s businesses. But this should not be seen only as a challenge but also an opportunity. Because easy work will not create talent. Great work will create great people.

MIC is going to raise more and more difficult questions, but, if solved, they will bring high economic value to ICT businesses.

Vietnam’s startups are meeting technology developers who are eager for new approach and new technology satisfying new demands, and investors who want to build Vietnam into a prosperous and powerful economy in association with the government’s Make in Vietnam Program.

More cooperation of the three parties is needed to solve more questions of the country, especially big, fundamental ones in order for Vietnam to develop.

Difficulties are ahead and it’s still too early to say about success. However, Vietnam’s businesses need to think big, solve questions thoroughly, follow clear business models, and have differentiated approach.

Digital transformation and the digital economy