Vietnam’s rice exports to Philippines up, but farmers aren’t happy

Rice exports to the Philippines have increased sharply as the country has lifted quotas since the beginning of the year. However, Vietnamese farmers have not received big benefits.

In previous years, the Philippines applied the quota scheme for importing rice. Private companies were allowed to import 850,000 tons of rice a year. Meanwhile, the National Food Agency (NFA) bought rice through government bidding, mostly from Vietnam and Thailand. 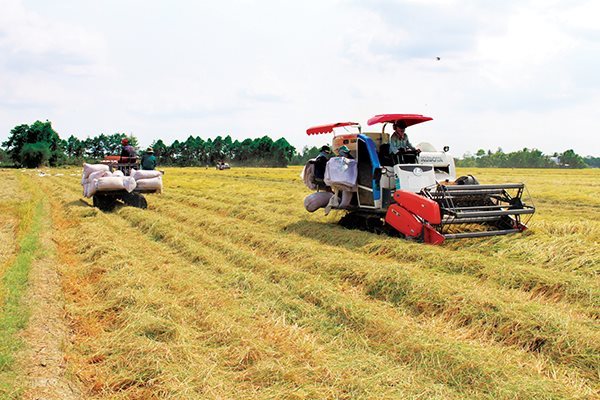 However, the quota scheme has been eliminated since 2019 and replaced by the import tariff of 35 percent levied on rice imports from ASEAN countries. The tax rate is much lower than the 180 percent tax rate imposed on non-ASEAN imports.

The changes in policy helped Vietnam’s rice exports to the Philippines increase sharply in the first months of 2019. The General Department of Customs (GDC) reported that in the first seven months of 2019, Vietnam exported 1.46 million tons of rice to the Philippines, a 218.8 percent increase compared with the same period last year, worth $590 million, an increase of 171.4 percent.

The export price decrease partially affected the domestic price. According to Nguyen Thanh Phong, director of Van Loi, exporters have to lower the prices at which they buy rice from farmers.

According to Nguyen Dinh Bich, a respected rice expert, the rice price in the world market is on the decrease. Vietnam’s export price was $432.5 per ton only in the first seven months of the year, or 14.7 percent lower than the same period last year.

Bich also thinks that the tax rate of 35 percent levied on rice from Southeast Asia is also a factor that forced the price of exports to the Philippines down.

A source said that the Filipino government is considering non-tariff measures to control rice import. It plans to impose strict sanitary and phytosanitary requirements to regulate rice imports.

The country may lower the MRL (maximum residue limit) of pesticides in rice imports to approximately zero and require shipments to go through pest risk analysis.

The request, according to the Philippines Department of Agriculture, aims to help farmers cope with the domestic rice price decreases caused by the flood of cheap imports.

Lam Anh Tuan, director of Thinh Phat Company in Ben Tre province, said that the Philippines changed its rice import policy to protect domestic production. However, he noted that requiring higher quality of imports is a trend in the world, not only in the Philippines.

Bich commented that because the Philippines decided to strengthen control over imports, Vietnam will have to change its export strategy.

The Energy Ministry of Thailand is planning to use 1.5 billion baht (about 49 million USD) from the state Oil Fund to support local oil prices.

The rice price guarantee scheme will begin next month with farmers set to be paid the difference when the price falls below a predetermined benchmark, Deputy Prime Minister and Commerce Minister Jurin Laksanawisit said.