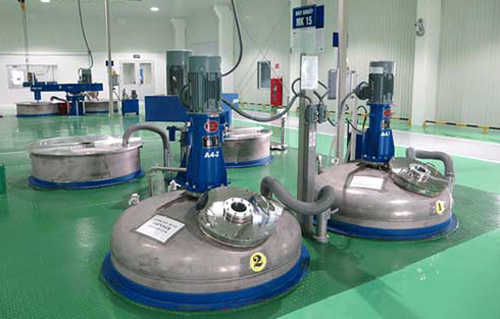 A debate about the lack of an adequate support industry in the country was sparked by a comment made by a Samsung official that Vietnamese could not make simple parts and accessories like screws.

However, a local official disagreed, saying that Vietnamese were capable of making screws that could satisfy requirements set by Samsung. The problem is that such screws require a higher production cost.

“They (Vietnamese enterprises) understand they have a large market in which their products can sell well if they are good enough. However, they remain indecisive on whether to set up factories to make the products,” an official said.

Nippon Paint, for instance, has put a third paint factory into operation to supply the auto, motorcycle and shipbuilding industries. Its $14 million factory in Vinh Phuc province is expected to make 15,000 tons of products per annum, mostly high-quality products. IN 2005, Nippon opened a second factory Vinh Phuc province, with designed capacity of 5,000 tons per annum.

Kondo Masao, general director of Nippon Vinh Phuc Paint Company, said the decision to open a third factory was made because there had been a sharp increase in the demand for paint, caused by high economic growth and the developing automobile industry.

Nippon, Kansai Paint, BBG and several other brands are the main paint suppliers to most automobile manufacturers in Vietnam, including foreign-invested companies such as Honda, Yamaha and Toyota, and Vietnamese firms such as Truong Hai and Xuan Kien.

“With a large output of 40,000 vehicles a year, Truong Hai needs a large volume of paint. However, over the last 10 years, no Vietnamese company has been able to provide the products we need,” he said.

Bui Ngoc Huyen, general director of Xuan Kien Automobile JSC, explained that the paint used in the automobile industry is high quality as it can resist scratching, withstand acid rain and protect vehicles from ultraviolet rays. Such products cannot be made in Vietnam.

“Vietnamese paint can be used only for our fences. We have to use Thai products to paint our workshop,” the director of a Hanoi automobile enterprise said.