PM Thongloun Sisoulith briefed his host of the recent situation in Laos and the outcomes of the talks with his Vietnamese counterpart Nguyen Xuan Phuc earlier the same day.

He affirmed that the Lao Government will continue working closely with the Vietnamese Government to direct relevant ministries, sectors and localities to effectively carry out the agreements between leaders of the two Parties and countries.

For his part, Trong spoke highly of the governments’ cooperation and efforts by ministries, sectors and localities in realising the agreements between the Parties and the governments.

He applauded the talks between the Vietnamese and Lao PMs, asking them to direct their countries’ ministries, sectors, localities and businesses to implement the signed deals fruitfully.

The leader also told them to further exchange information on and experience in the Party and political system building, management of the economy and society, integration into the world, and implementation of resolutions of the Parties’ national congresses.

The two sides should also seek solutions to existing difficulties so as to improve partnerships in economy, investment, trade, culture, education – training, and science – technique.

He added that amidst the complex and unpredictable developments in the region and the world, the two sides also need to increase sharing information and coordinate closely in situation forecasting. 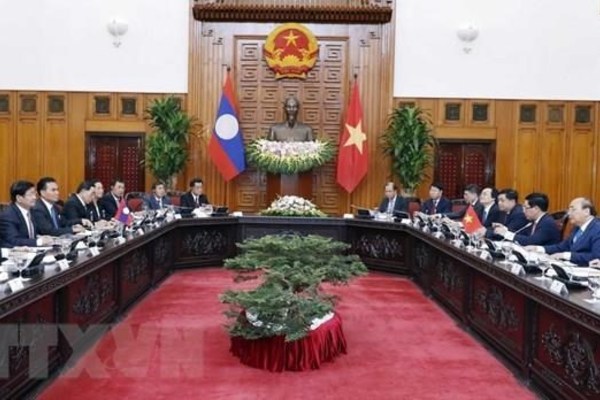 Prime Minister Nguyen Xuan Phuc and his visiting Lao counterpart Thongloun Sisoulith reaffirmed the importance of the relation of great friendship, special solidarity and comprehensive cooperation between Vietnam and Laos during their talks in Hanoi on October 1.

The talks took place following the official welcome ceremony in the afternoon the same day.

Both sides agreed to facilitate all-level visits via the Party, State, Government and National Assembly channels, enhance the sharing of experience in socio-economic development in each country, effectively realise the outcomes of the 41st meeting of the Vietnam - Laos Inter-Governmental Committee, and encourage the two countries’ ministries, agencies and localities to expand ties.

They vowed to continue implementing border treaties and agreements, promptly preventing border violations, fighting trans-border crimes and stepping up the signing of agreements on national defence and security.

The two leaders pledged to take effective measures to ensure the progress and quality of Vietnamese projects in Laos, and hold more exchanges between leaders of the Lao government and the Vietnamese business community in Laos.

The Lao PM committed to simplifying procedures and reducing costs related to the grant of permits to Vietnamese workers.

The two leaders took the occasion to share various common assessments of the regional and international situation, as well as the coordination between the two countries in the time to come, including Vietnam’s shouldering the role of the ASEAN Chair in 2020 and a non-permanent member of the United Nations Security Council for the 2020-2021 term.

On regional and global issues of shared concern, they affirmed the significance of maintaining peace, stability, law abidance, maritime and aviation safety and freedom, the settlement of disputes in the East Sea by peaceful means in line with international law, particularly the 1982 United Nations Convention on the Law of the Sea (UNCLOS).

They reaffirmed the ASEAN’s stance on the East Sea issue mentioned in the bloc’s recent declarations, especially the joint communiqué at the 52nd ASEAN Foreign Ministers’ Meeting in Bangkok in July, according to which the parties consented to strengthen mutual trust, exercise self-restraint and avoid actions that could further complicate the situation, refrain from the use of force or threat to use force, prevent militarisation, fully and seriously implement the Declaration on the Conduct of Parties in the East Sea (DOC), towards soon reaching a practical and effective Code of Conduct in the East Sea (COC) in accordance with international law, including the 1982 UNCLOS.

The two sides pledged to continue working with member states to step up prosperity, solidarity and self-resilience of the ASEAN Community, uphold ASEAN’s central role in regional architecture towards a region of peace, stability, cooperation and prosperity based on rules.

Following the talks, the two PMs witnessed the signing of eight cooperation agreements in the fields of economy, investment, education, finance, banking, energy and aviation.

The two sides issued a joint declaration on the strengthening of Vietnam – Laos relations of great friendship, special solidarity and comprehensive cooperation in the new situation.

The Lao leader will stay in Vietnam till October 3./.VNA