Viettel once again claimed the top spot as Vietnam’s fastest mobile provider during the last quarter of 2021. 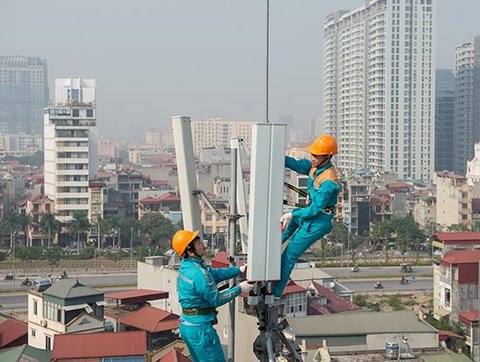 Vinaphone closely followed with a speed score of 45.51. MobiFone came last at 35.81.

The rankings are based on data from Speedtest which relies on median download speed to best reflect the speeds a user is likely to achieve in a market.

Viettel also overtook Vinaphone for the highest mobile Consistency Score in Viet Nam during Q4 2021 with 91.2 per cent of results showing at least a 5 Megabit per second (Mbps) minimum download speed and 1 Mbps minimum upload speed.

However, when calculating median latency for top mobile providers in Viet Nam during the last three months, Vinaphone had the lowest latency at 19 milliseconds (ms). Meanwhile, the latency of MobiFone and Viettel were 22ms and 26ms, respectively.

The report also analysed performance on some of the fastest phones in Viet Nam which revealed the iPhone 13 Pro Max showed the fastest median download speed with 72.39 Mbps.

Apple was also the manufacturer with the fastest median download speed in Viet Nam during Q4 at 37.76 Mbps, followed by Xiaomi and Samsung at respectively 35.73 and 35.64 Mpbs.

According to the report, HCM City retained the top spot for the fastest median fixed broadband download and upload speeds among Viet Nam’s most populous cities at 75.10 Mbps and 72.48 Mbps, respectively.

The number of Internet subscriptions in Viet Nam hit a record last year, with nearly 71 million mobile broadband subscriptions and 18.8 million fixed ones, respectively rising 4 per cent and 14.6 per cent from 2020.

Meanwhile, Internet users reached 71 million for the first time, accounting for two-thirds of the population. Internet traffic also grew strongly by over 40 per cent, in 2021.

Telecoms businesses stepped up developing broadband infrastructure last year. So far, the 5G network has been piloted in 16 provinces and cities, 4G covered 99.8 per cent of the population, and the cable internet service reached 100 per cent of communal-level localities, reported the Authority of Telecommunications under the Ministry of Information and Communications.

There are five undersea cable routes currently operating in Viet Nam, namely AAG, SMW3, IA, APG, and AAE-1. Two others, SJC 2 and ADC, are scheduled to be put into use in 2022 and 2023.

Meanwhile, other countries in the region have more routes such as Singapore 30, Malaysia 22, and Thailand 10. Compared to them, international infrastructure serving internet connection in Viet Nam remains modest, Dau Tu (Investment) paper reported.

Hoang Duc Dung from the Global Operation Centre at Viettel Network Corporation, an affiliate of the Viettel Group, said it is necessary to develop infrastructure for international internet connection on par with regional countries.

Deputy Director of the Telecommunications Authority Nguyen Phong Nha held that to improve broadband internet quality, the focus should be on upgrading bandwidth and modem devices’ capacity, widening domestic and international bandwidth, and amending standards. Aside from investing in internet infrastructure, telecoms services suppliers should also prepare backup plans.

According to experts, developing digital infrastructure, including the internet, telecoms and cloud computing infrastructure, is set to be the focus between now and 2025. This will also create a big opportunity for service providers, infrastructure developers, and operators to compete equally with transnational enterprises in Viet Nam.