VietNamNet Bridge – Together with two other common village symbols - the banyan tree and the well - a temple is essential to the spiritual life of almost all people in rural areas.

VietNamNet Bridge – Together with two other common village symbols - the banyan tree and the well - a temple is essential to the spiritual life of almost all people in rural areas. 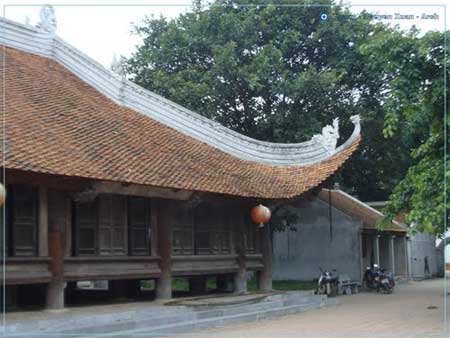 For illustration only. (Photo: Internet)

The village temple serves as a common playground for kids, a place of worship for adults, and an ideal meeting hall for village elders to impart their wisdom to youngsters.

Every village in the countryside has its own temple which provides a venue for religious rituals and contests during traditional festivals. The temple is also a launching pad for national patriotic movements or acts of charity.

The temple has its front and back yards used for communal preparations and celebrations especially during the lead-up to the spring and Lunar New Year (Tet) holiday. It witnesses music and dance performances, and folk games like wrestling, ball throwing, and tug-of-war.

For centuries, the village temple has functioned as both a communal house and a place of worship dedicated to village founders and other notables who are seen as the source of all wisdom.

As a token of local culture, lifestyle and traditions, a typical village temple is built on highest ground with its huge wooden pillars resting on square stones. The temple roof is often constructed to evoke the shape of a ship and its intricate decoration includes images of dragons, flowers of four seasons, and human activities.

Villagers assemble at their temple on special occasions to offer incense and pray for fair weather, happiness, prosperity, and good luck.

Many old village temples have been preserved in good shape. Dinh Bang Temple in Bac Ninh, Hang Kenh Temple in Hai Phong, and Tra Co Temple in Quang Ninh are vivid examples of original architectural styles which already reached a high level of civilization centuries ago.