Vinalines case shows that arbitration law is being ignored in Vietnam

VietNamNet Bridge – Vinalines and its partners agreed in the past that company disputes could be brought to the Vietnam International Arbitration Center (VIAC), but the shipping firm has not obeyed VIAC’s judgment.

VietNamNet Bridge – Vinalines and its partners agreed in the past that company disputes could be brought to the Vietnam International Arbitration Center (VIAC), but the shipping firm has not obeyed VIAC’s judgment. 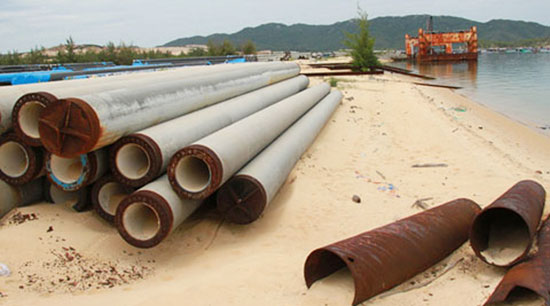 Equipment left under the sun and rain at Van Phong port.

Vinalines, the country’s largest shipping corporation, lost a case brought to VIAC earlier this year, and it was forced to pay VND62.5 billion to the South Korean SK E&C as compensation for breaking a contract for the construction of a harbor at Van Phong transit port in Khanh Hoa province.

Vinalines, which did accept the verdict, petitioned the Hanoi People’s Court, asking the court to annul the verdict. It also asked for the relevant ministries’ intervention to help speed up the trial of the case.

The Ministry of Transport has sent a dispatch to the Hanoi Court, asking them to try the case soon in order to help ease Vinalines’ difficulties.

While the Ministry of Transport backs Vinalines, lawyers have criticized the shipping corporation’s behavior.

They cited the Commercial Arbitration Law as saying that Vinalines must respect the judgment of the arbitrators, because it agreed before to have disputes to be arbitrated at VIAC.

“They (Vinalines) chose VIAC and therefore, it must obey VIAC verdict,” a lawyer said, emphasizing that the agreement on dispute settlement was a provision of the contract signed between Vinalines and the South Korean partner.

The lawyer went on to say that as Vietnam has become more involved in global trade, its enterprises must respect international laws and practices.

The chosen arbitrators cannot be VIAC’s arbitrators. In principle, arbitrators must be independent and objective when considering cases, while no one can intervene in the arbitration council’s work.

The disputing parties do not have the right to appeal against arbitrators’ decisions, and therefore, the decisions take effect immediately, not only in Vietnam, but in all the 149 countries which are the members of the 1958 New York Convention on the Recognition and Enforcement of Foreign Arbitral Awards, unless one of the parties’ petitions the court to annul the arbitrators’ decisions.

However, Dung said, the court will only annul arbitrators’ judgments if it finds serious violations of the arbitration proceedings.