Vietnam, as revealed by Google in 2019, is one of YouTube’s five ‘gold mines’, with an annual two-digit growth rate in the number of viewers. 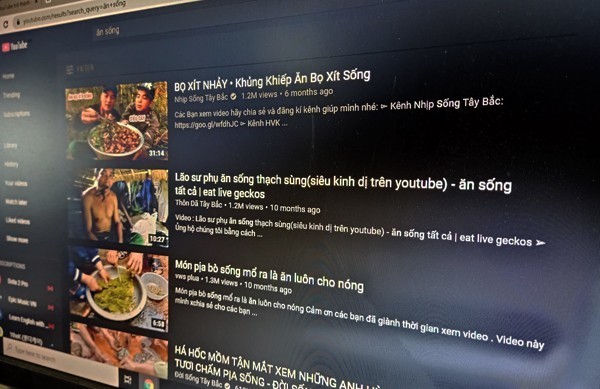 In the early days of YouTube, Vietnamese 'workers' could ‘industrialize’ the ‘content production line’ to make money on the video social network.

Just a short time after turning on ‘monetization’ in 2007, YouTube welcomed the first generation of talented Vietnamese vloggers, including Toan Shinoda, Huyme and JVevermind.

Another small group saw opportunities to get rich on YouTube. This was the time for the first generation of ‘workers’ who had the production skills for re-up.

Re-up is producing content by copying others’ clips, grafting and editing to create new clips, and posting as clips of their own on their channels to earn money.

But several years later, copying others’ clips no longer could bring money as YouTube turned off the ‘monetization’ of these channels which re-upped others’ clips.

Facing the risk of becoming ‘redundant’, the ‘workers’ of the YouTube ‘factory’ tried other ways to make money by changing the ‘production method’. Re-up skills improved and became more sophisticated, and are now used together with SEOs, backlinks and cross subscriptions.

The ‘workers’ tried many different methods to find out the best way to lure viewers and stay safe and not violate YouTube’s rules.

Some found that producing content for children was a gold mine to exploit, from cartoons with voiceovers or subtitles to videos with ‘sensitive content’.

Vietnamese agencies once punished the owner of ‘Spiderman Frozen Marvel Superhero Real Life’, who dispersed a clip labelled as a clip for children that actually contained debauched content.

Because of the rise of domestic networks cooperating with YouTube, the ‘trash content’ for children gradually disappeared, giving place to channels that were well invested, professionally designed, and copyrighted.

Another kind of ‘trash content’, however, exists now -- challenges and pranks. More and more clips of these kinds have been posted.

Some culinary-themed channels show traditional dishes, but with unhealthy content, which creates misunderstandings about Vietnamese culture.

The videos of this kind focus on eating raw food, eating untreated animal organs, and not using marinated recipes. Despite fierce criticism from the public, the videos still exist on YouTube with millions of views.

As for trash videos by YouTubers, experts said it is very difficult to eliminate the problem. The responsibility for this includes viewers, YouTube’s censors and state management agencies.

But even if viewers are determined to remove dirty clips by reporting the cases to YouTube, they still doubt whether they will ever be removed.

Producing YouTube content has become an industry in Vietnam and the production has led to the development of ‘supporting industries’.

Classes have been created to teach people how to make YouTube clips, and services exist to help people boost the number of reviews, likes and comments, and place clips on recommendation lists.

YouTube, Facebook, Dailymotion and Patreon, or any platform which offers revenue sharing, have been and will attract high numbers of content producers, and the ‘trash content’ which dirties the digital environment will continue to appear if the platforms apply policies on revenue sharing, thus fostering the illusion among young people of being able to get rich.