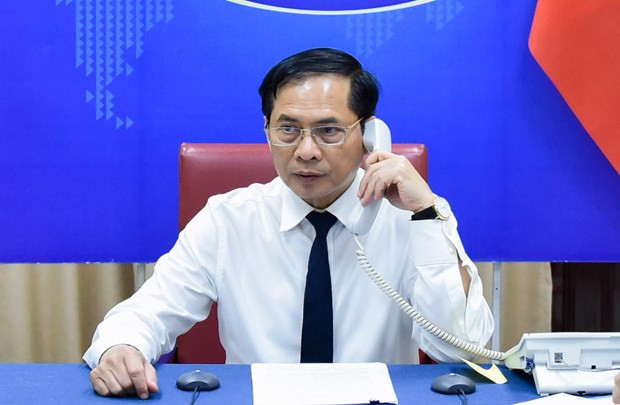 Foreign Minister Bui Thanh Son asked Jordan to support the Embassy of Vietnam in citizen protection and providing reliefs for Vietnamese survivors of a toxic gas leak at the port of Aqaba while talking to Jordanian Deputy Prime Minister and Minister of Foreign Affairs and Expatriates Ayman Al-Safadi over the phone on June 29.

Deputy Prime Minister Ayman Al-Safadi offered condolences to Son and families of the Vietnamese victims, saying Jordanian authorities will do their best to assist the Embassy of Vietnam in citizen protection and handling remains of Vietnamese nationals killed in the accident.

On behalf of the Government of Vietnam and the Vietnamese Ministry of Foreign Affairs, Son also extended his deepest sympathy to Jordan’s losses caused by the accident. He thanked the Jordanian foreign ministry and authorities for promptly reporting on the five Vietnamese people killed and for providing medical help for those injured.

He asked Jordanian authorities to step up investigation of the cause of the gas explosion and provide instructions on handling the dead’s remains.
According to the Embassy of Vietnam in Arab Saudi and Jordan, a poisonous gas explosion at Jordan’s southern port of Aqaba on June 27 killed 13 people and injured 251 others. A initial report shows that the accident claimed the lives of five Vietnamese citizens and injured seven others who all are crewmembers of Hong Kong (China)-flagged vessel Forest 6.