More banks have published their 2019 finance reports and the number of banks reporting fat profits has increased. Some banks saw the profit soaring by 70 percent. 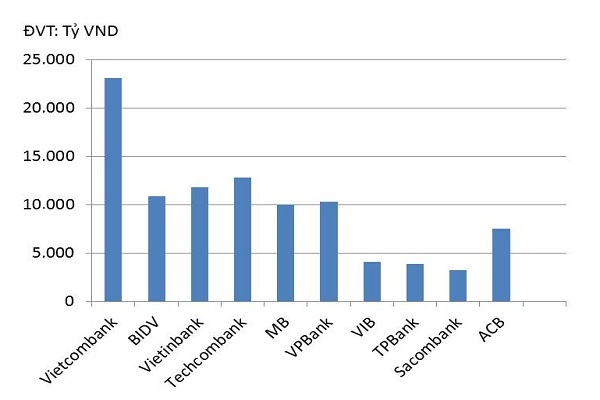 The profits by some commercial banks in 2019

As the third most profitable bank, VietinBank has caught attention from the public.

Since it cannot raise the chartered capital and therefore cannot expand credit, the bank only set a modest profit target of VND9.5 trillion for 2019. But the result was better than expected with pre-tax profit of VND11.78 trillion, up by 79.6 percent over 2018.

With the encouraging result, VietinBank surpassed rivals and jumped from the seventh to the third position in the list of most profitable banks.

The strong rise of VietinBank led to BIDV falling one grade to the fourth position in the list with VND10.876 trillion in pre-tax profit, an increase of 15.8 percent compared with 2018.

In 2019 the strong rise of middle-class banks occurred. TP Bank has surprised investors with the profit increasing sharply by 71.3 percent in 2019 to VND3.868 trillion. VIB Bank also reported a sharp increase of 49 percent in profit in comparison with the previous year to VND4.082 trillion.

Among state-owned banks, Vietcombank has the highest ROA, but it is just 1.89 percent.

Analysts commented that credit remains the business division which has led to the biggest contribution to banks’ profit and revenue.