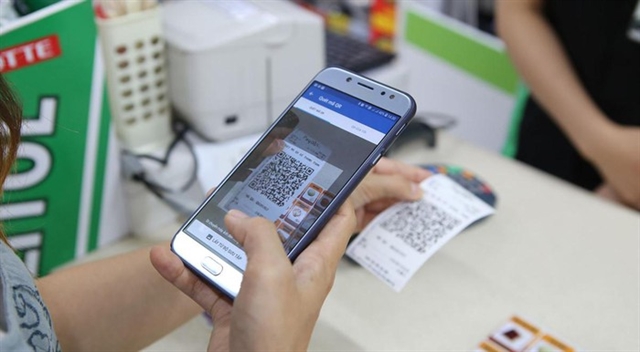 Decree No.101 allows payment service providers, including foreign ones, to freely raise capital to develop their business.— Photo bizlive.vn

It had spoken about plans to bring in a foreign ownership limit of 49 per cent on an industry that currently has no restrictions to avoid manipulation by foreign investors.

Decree No.101 allows payment service providers, including foreign ones, to freely raise capital to develop their business.
Payment services refer to electronic wallets (e-wallets) which allow customers to make payments from their smartphones and computers.

Some experts said the payment services market has grown quickly thanks to the rapid growth in technology that has made it easier than ever to transfer money online, including across borders.

Việt Nam has 27 institutions which are not banks but are licensed to provide payment services, a majority of them with foreign ownership of above 49 per cent. For instance, 1Pay is 90 per cent owned by Thailand’s TrueMoney.

The management of cross-border electronic payments faces many difficulties due to the fact that most transactions are conducted through international payment gateways and handled by international card organisations.

Because of this, many experts think it is time to tighten control over the payment services industry to ensure the security of the country’s payment system.

They said limiting foreign ownership would prevent any manipulation of the banking and financial sectors and ensure local players take up the slack.

The central bank seemed to concur with this contention and indicated it planned to bring limits on foreign ownership rates in the new decree.

But recently there have been protests from experts from various sectors after the draft of the decree was made public.

They said while strict control over the industry is imperative, it is not necessary to cap foreign ownership.

Restricting their ownership rates could scare foreign investors away, they warned.

Ngô Trung Lĩnh, general director of the VietUnion Online Service Corporation, was quoted as saying by Đầu tư Chứng Khoán newspaper that Việt Nam is an attractive destination for Southeast Asian investors, but if the foreign ownership in the payment services industry is capped at 49 per cent, it would prevent the country from attracting investments and advanced technologies, slowing its development.

Many others in the industry shared his views, saying resources are always required for investment in technology, and so the industry could not do without the cheap and plentiful foreign capital.

Legal experts said a cap could violate the country’s commitments to the World Trade Organisation (WTO) and Comprehensive and Progressive Agreement for Trans-Pacific Partnership (CPTPP) as well as bilateral investment protection agreements.

It could also flout the country’s own Investment Law, they said.

A spokesman for the central bank said after hearing these arguments the decision to cap has been deferred.

The Investment Review newspaper recently quoted the IDC Becamex Corporation headquartered in the southern province of Bình Dương as saying it had decided to invest 30 per cent, or around VNĐ30 billion, in the VNĐ100 billion VSIP-Becamex Bình Thuận Industrial, Service, and Urban Complex it plans to build in partnership with the Vietnam Singapore Industrial Park.

It has already started construction of another facility, the Châu Đức Urban Industrial Zone in the Bà Rịa-Vũng Tàu Province. It will be a complex with many components like an industrial production zone, warehousing zone, inland clearance depot (ICD), urban commercial zone, service zone, recreation zone, park, golf course, and other facilities.

It has been designed by Hyder, a leading global construction consulting firm.

Sonadezi chairwoman Đỗ Thị thu Hằng said this year the company plans to speed up completion of legal procedures to further invest in industrial parks in Đồng Nai province, and do feasibility studies for other industrial parks and urban-service areas elsewhere.

The VNĐ872 billion park is expected to have high rental yields at an estimated US$85 per square metre and a gross profit margin of 48 per cent, according to a report by Việt Dragon Securities Company (VDSC).

Analysts said the reason leading industrial park developers like Becamex and Sonadezi are stepping up investment now is that they want to fully tap opportunities brought by Vietnam’s signing of several free trade agreement (FTAs).

Besides increasing its exports, FTAs also help the country foster administrative reform, improve infrastructure and ensure a level playing field for all in accessing resources, all of which make its investment environment attractive to investors, they said.

Vietnamese enterprises, especially those in the industrial property sector, are expected to get many new opportunities starting this year.

VDSC’s 2020 investment strategy report also points out that investors’ demand for industrial space would continue to rise in the coming years, and 2020 is likely to be a good year for developers with unencumbered lands.

In 2019 the number of foreign firms seeking opportunities to invest in Vietnam was up 30 per cent from the previous year, many of them from Japan, South Korea, China, Hong Kong, and Singapore.

Major industrial park developers like Becamex IDC and Phước Hòa Rubber Joint Stock Company, which own large tracts of industrial lands, will have enormous opportunities to achieve a breakthrough in their business.

However, small developers with limited lands too will have a chance to profit if they focus their resources on the exploitation of the ready-built factory and warehouse for lease segments, according to VnDirect Securities Company.

A CBRE Vietnam spokesperson said industrial parks in localities far from economic hubs like Bình Phước, Tây Ninh and Bà Ria-Vũng Tàu would still be able to benefit from the FTAs but possibly a bit later.

Of them, those that have good infrastructure would achieve better growth in rentals and fees, he said.