How to organize social distancing while still ensuring uninterrupted production and goods circulation is uppermost in agencies' thoughts. 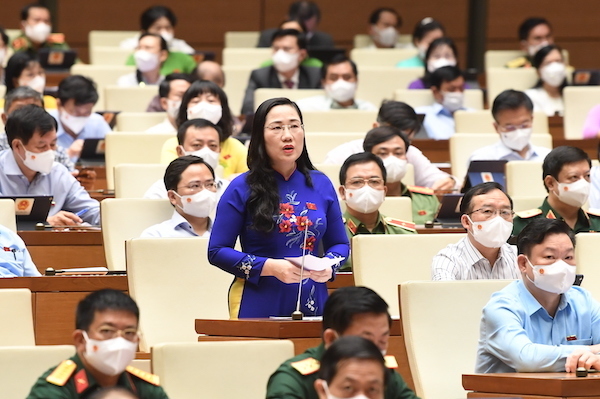 Pham Thi Ngoc Thuy and co-workers at the Office of the Private Economic Development Research Board, or Committee IV, late last week received many calls and messages from enterprise associations, businesspeople and drivers who had to queue up on highways in the north, waiting for the nod for their trucks to go through checkpoints.

The Lang Son province Association of Vietnam-ASEAN Transit Goods Traders called to seek help from Thuy as its trucks could not go through Hanoi because of the municipal authorities’ new regulations in applying Directive 16.

They tried to contact the two hotlines provided by the Hanoi Transport Department, but failed. They also failed to register for ‘green passage’ to get priority in transportation.

“The situation is occurring in many cities and provinces because the localities apply different regulations to fight the pandemic. The danger of production chain disruption is visible,” Thuy warned.

This was a hot topic of discussion at the NA on July 25.

Minister of Planning and Investment Nguyen Chi Dung said the ‘hottest’ regulation is the one set by Hai Phong authorities. All the people returning to Hai Phong from Hanoi or going through Hanoi have to show negative PCR testing results and spend 14-day concentrated quarantine. The regulation has put all the transportation activities between Hanoi and Hai Phong into an extremely tense situation, Dung said.

“The imposition of social distancing in many cities/provinces throughout the country has seriously affected enterprises’ operation,” he said.

Nguyen Thi Thuy, a NA Deputy from Bac Kan, said an enterprise complained that its farm produce trucks were not allowed to enter a locality, though the drivers showed the certificate on safety. Other enterprises said their trucks could go through the checkpoints in many provinces, but could not enter the last province where they needed to deliver goods and had to return to the departure point.

“The country is a living organism which cannot be cut apart because of the disease. We need to impose quarantine but this must not lead to the disruption of production and business chains in the economy,” Thuy said.

She said some deputies highly appreciate the Government’s prompt actions to solve this problem. The PM’s Telegram on June 5 pointed out that some localities had applied rigid and extreme measures, causing a disruption of large-scale supply and production chains. The PM has assigned tasks to every Minister to check and settle the problem immediately.

Since the PM’s Directives 15 and 16 were adopted last year, the ways of fighting the pandemic have been shown in detail, which has gained people’s confidence.

Nguyen Minh Tam, a NA Deputy from Quang Binh, emphasised the need to perfect the legal framework that serves the fight against the pandemic and ensures citizen’s rights.

He said some legal documents need amendment because they have become out of date. These include the ones on infectious diseases which comprise regulations which cannot be applied during Covid-19.

The Government has proposed measures to prevent and fight the Covid-19 pandemic, giving more power to make timely decisions on applying flexible measures to satisfy the needs of the fight against the pandemic.

It needs power to apply anti-epidemic measures in a state of emergency (if the state of emergency is declared, there will be negative impact on national defence, economy, social order and security, foreign affairs and people’s life), and the measures which have not been legalized.

The Government has asked the NA to put the content on Covid-19 prevention and control I the resolution of the first session of the 15th NA to lay down a firm legal basis in fighting Covid-19.

The proposal has been advocated by many NA Deputies.

“I believe that giving the Government and PM the power to take initiative in making decisions and organizing the implementation of necessary measures to fight the pandemic, an unprecedented one, is a necessity which needs to be implemented in this ongoing session,” said Nguyen Truong Giang, a NA from Dak Nong.

To Van Tam from Kon Tum said he supports the idea of allowing the Government to apply special measures, but it is necessary to define the limitations, sphere and time.

Agreeing to the proposal, Tran Van Lam from Bac Giang said the NA should give the Government, now the ‘general in the battlefield’, a ‘sword of power’.

Vietnam continues to extend tax and fee exemptions amid the ongoing pandemic, with a new VND24 trillion ($1.04 billion) bailout package in the making.