VN, NZ pledge to raise two-trade value to US$1.7 billion 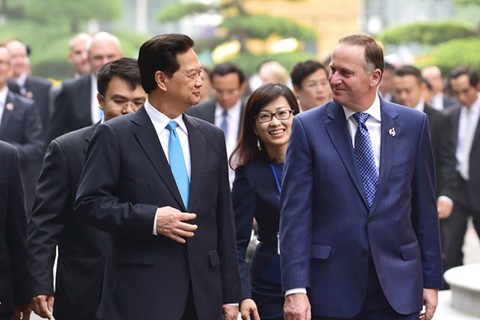 
Both sides agreed to maintain regular exchange of delegations at all levels, promote the existing cooperation mechanisms, and effectively deploy the Action plan for the period 2013-2016.

PM John Key pledged to continue development aid, especially in such fields like agriculture, knowledge and skills, and disaster risk management as well as technical assistance for market development and brand building for Vietnamese agricultural products, including dragon fruit.

Regarding security and defense cooperation, the two sides spoke highly of the new developments in this area. New Zealand committed to continuing its support for Viet Nam in English training for peacekeeping operations and strengthening cooperation and experience sharing in maritime law enforcement.

Both sides agreed to open direct air route next year to further exploit their tourism potential.

The two PMs took the occasion to strongly condemn a series of inhuman terrorist attacks which took place in France on November 13.

Discussing on the East Sea issue, the two PMs shared their concern over the recent happenings in the East Sea, reaffirming the position of settling disputes through peaceful measures on the basis of international law.

They particularly highlighted that the massive land reclamation activities in the East Sea have eroded trust, sparked deep concerns among the international community, and adversely affected peace, security and stability in the region.

The two sides welcome efforts of all countries to contribute to ensuring peace, stability, security, safety and freedom of aviation and navigation in the East Sea.

PM John Key called on relevant parties to exercise self-restraint and comply with international law, including the 1982 UN Convention on the Law of the Sea while seeking for peaceful measures to address disputes.

After the talks, PM Dung and his New Zealander counterpart witnessed the signing ceremony of a number of documents on civil aviation, education and healthcare cooperation. 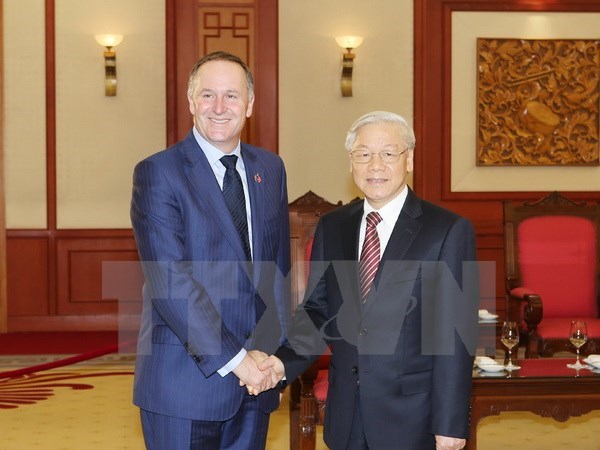 Impressed by Vietnam’s socio-economic progress and its role in the region, PM Key affirmed the importance of promoting mutually beneficial collaboration with Vietnam in prioritised fields, including agriculture, agricultural trade, education and aviation.  The two sides see greater cooperation chances generated by the Trans-Pacific Partnership deal and the Australia-New Zealand-ASEAN free trade agreement, he noted.  The PM went on to highlight the importance of both nations’ increasing mutual support at regional and international forums.  Party General Secretary Trong hailed the significance of PM Key’s Vietnam visit, especially at a time when the two countries are celebrating the 40th anniversary of diplomatic ties (1975-2015).  He stressed the Vietnamese Party and Government’s consistent policy of attaching importance to cooperation with traditional friends, including New Zealand.  He expressed his wish for fostering closer ties between the two ruling parties, parliaments and peoples.  The two countries need to enhance cooperation in fields to realise the Action Programme for 2013-2016, deepening the comprehensive partnership towards the strategic partnership between Vietnam and New Zealand, he said.

President Truong Tan Sang expressed his delight at bilateral cooperation in all sectors between Vietnam and New Zealand during his reception for visiting NZ Prime Minister John Key in Hanoi on November 16.

He said he believes the Key’s current visit to Vietnam will be an impetus to boosting the two countries’ relations in the coming time.

The President appreciated New Zealand’s support for Vietnam at international forums and Vietnam’s stance on the East Sea issue.

He said the international community, including New Zealand, plays a crucial role in maintaining regional stability, accelerating the early conclusion of a Code of Conduct in the East Sea (COC), and not militarising, expanding, or complicating the situation.

For his part, Prime Minister Key said his entourage includes a considerable number of agencies and enterprises seeking cooperation opportunities in Vietnam.

The Trans-pacific partnership, of which both New Zealand and Vietnam are members, will pave the way for the two nations to become strategic partners, he affirmed.

He informed his host about the increasing number of Vietnamese students and tourists to New Zealand.

He said he is looking forwards to meeting Vietnam’s leaders at the upcoming APEC forum held in Manila, the Philippines.

The NA leader hailed the visit which came in concurrent with the 40th anniversary of diplomatic ties.

He spoke highly of the outcomes of his guest’s talks with Prime Minister Nguyen Tan Dung and assured that the Vietnamese legislature backs the promotion of friendly and all-around collaboration with New Zealand.

Introducing the 70-year tradition of the Vietnamese NA, the host said a number of laws are being aligned with the 2013 Constitution terms that better ensures human rights and citizen rights to freedom and democracy.

The top legislator suggested extending joint work between the two governments in the field of agro-fisheries - one of Vietnam’s strengths.

He emphasised that the New Zealand parliament continually wants to extend partnerships between the two countries.