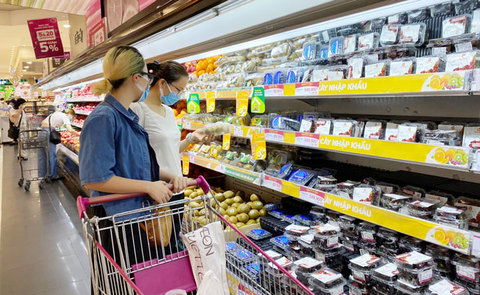 According to the committee, keeping the figure lower than 4 per cent by the end of the year is important so the country can have a good start to 2022, especially in light of Viet Nam's dual-target strategy of achieving COVID-19 containment and economic development simultaneously.

CPI, however, has always been tricky during this time of the year as the market will likely experience surges in demand for certain commodities during the end of the year. This has been made more challenging a task since the fourth outbreak of the novel coronavirus, which started in late April and until now has not been put completely under control.

The committee has asked the Ministry of Finance to implement more flexible monetary policies and make adjustments to some macroeconomics targets in response to the pandemic. Local governments must keep an eye on the market's supply and demand of essential commodities and ensure a smooth flow of goods and services, especially for localities that have been put under lockdown.

Businesses have been advised to start preparing for the Lunar New Year by stocking up on popular goods. Market surveillance agencies across the country have been told to turn in reports to the central government as well as to ensure businesses under their watch must publicise their prices in a transparent manner.

Major contributing factors included rising import prices for animal feed, fertiliser, construction materials, petroleum products and Liquefied Petroleum Gas (LPG). According to a report by the Ministry of Industry and Trade, since the end of last year prices for WTI crude oil increased by 53.1 per cent, Brent crude oil by 46.2 per cent and steel ingots by 57-101 per cent.

Prices for certain essential commodities such as rice have also seen a surge due to increased demand in the global market since the beginning of the year. On the other hand, some progress has been made in pulling down prices for pork and poultry in the domestic market.

Vietnam to control CPI growth at less than 3 percent

If Vietnam could control inflation cautiously and proactively, the CPI for the whole of 2021 would rise by below 3 per cent, said an expert in Hanoi last week.