VietNamNet Bridge - One of the largest amounts of counterfeiting money – over VND600 million ($30,000) was seized by the authorities of Lang Son province at the Vietnam-China border on August 1.

VietNamNet Bridge - One of the largest amounts of counterfeiting money – over VND600 million ($30,000) was seized by the authorities of Lang Son province at the Vietnam-China border on August 1. 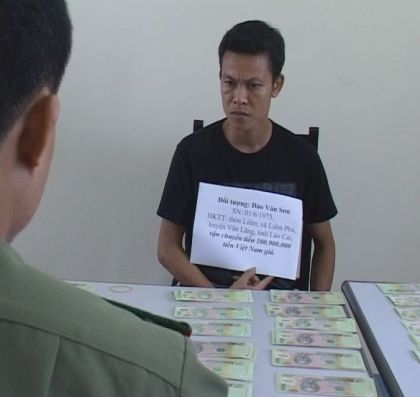 In the evening of August 1, staff of Tan Thanh Border Station detected a man carrying VND620 million of VND200,000 banknotes, which were determined as false money, from China to Vietnam.

The man was identified as Vu Ngoc Thang, 29, a resident of My Duc district, Hanoi. Thang said he worked as a porter in China for a time. In the evening of August 1, an unknown man hired Thang to transport a bag of goods to Vietnam, with pay of VND1 million ($50).

The volume of counterfeit money seized through the banking system and the State Treasury of Vietnam in 2012 fell by 29.2 percent y-o-y and by 46.08 percent two years earlier.

The amount of counterfeit money in circulation has declined in recent years after Vietnam switched to polymer notes in 2004, gradually replacing paper bills.

During the eight-year period [2004-2011] when polymer notes were used, the volume of fake polymer money equaled to only one-third of that of fake cotton notes collected from 1997 to 2004.

The monetary authority recommended consumers be aware of security features of authentic money and check the cash carefully during their transactions.