In late June, many pirated movie websites, including the best known such as phimmoi, dongphim, motphim and vtv16, were unexpectedly blocked in Vietnam. Since then, users in Vietnam cannot access the websites. 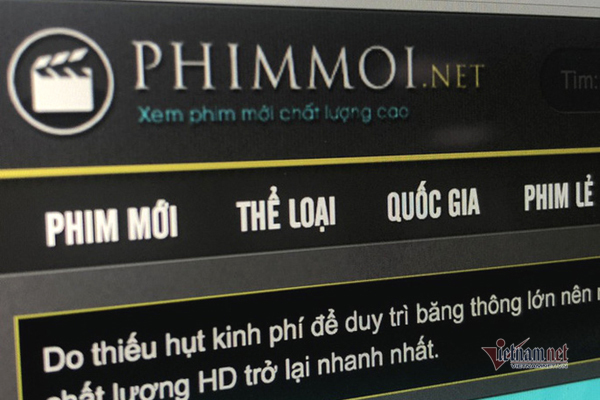 A source said the websites were blocked because of problems related to copyright infringement.

Of these websites, phimmoi.net is the best known. Before it was blocked, the website was listed among the 20 websites with the largest traffic with 60-100 million visits a month.

After the block, the owner of the websites tried to exist by changing domain names to avoid supervision by state management agencies. However, the number of visits to the sites has been decreasing sharply.

As for dongphim, also a well known website among young people, the number of visits dropped from 5.9 million in May to 400,000 in June, a decrease of 93.2 percent.

Analysts say that the effort to block pirated movies websites, including ones with newly set up domain names, has brought initial results.

How to stop pirated movie websites?

Digital content copyright infringement is a complex and difficult issue to deal with in Vietnam. This causes serious economic losses to the copyright owners and manufacturers.

The major reason behind the popularity of pirated movies websites is the huge profits they bring. Website developers can easily lure viewers because of high demand from people who have the habit of watching films for free.

The developers don’t have to pay for the content produced by other people and can make fat profits from ads. The ads for the content are very high because the services advertised there are mostly prohibited.

The developers of pirated movie websites understand that the sites are illegal and can be blocked at any time, so they prepare domain names to replace the major domain names if the names are blocked.

More than 300 businesses in Vietnam have eliminated pirated software and legalized software on 20,000 computers. HCM City is pioneering this activity.

The Vietnam National Institute for Culture and Arts Studies (VICAS) and the British Council will work together on a project to strengthen intellectual property enforcement in Vietnam.