What does Vietnam’s education system need?

Is it difficult to start a business in the education sector in Vietnam?

In 2010, returning to Vietnam after finishing a master’s degree in France, Dang Minh Tuan thought of setting up a model of teaching science subjects in English, which wasn’t available in Vietnam at that moment. 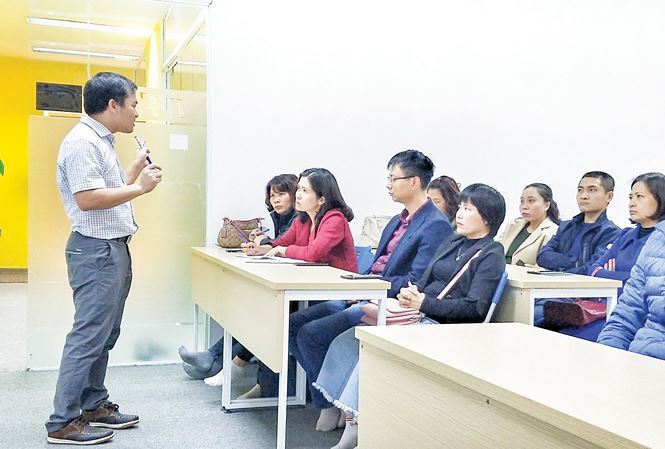 Tuan had different posts in the education system, from a teacher to deputy director of FPT general school system and strategic advisor to Ngoi Sao and Olympia Schools.

In 2016, when GotIt!, the education platform on Apple Store and Google Play came to Vietnam to recruit specialists, he joined as a recruiter. There were 10,000 candidates, but only 2 percent of them were recruited because of insufficient English skills.

Tuan was determined to implement the project on teaching science in English.

In 2017, Tuan left the Hanoi-Amsterdam High School for the Gifted, the best known school in Hanoi, to fully dedicate himself to the project implementation.

“HR management was the most difficult problem for me,” he said, adding that developing the teaching staff with good knowledge from the first days was a big challenge for UberMath.

UberMath designed lesson plans for teaching math and science subjects in English on its own based on the current curriculum set by the Ministry of Education and Training  (MOET) with additional critical and practical math topics.

Parents can register for UberMath lessons on the website or through smartphone apps.

After considering the curriculum in developed countries such as the UK, US and Singapore, Tuan found that while the countries aim to help improve students’ thinking, Vietnam aims to teach students skills.

Tuan believes that Vietnamese students need to learn critical math skills in English, without translation, because this helps them get used to thinking in English.

Once a teacher, Tuan understands the problems Vietnamese teachers meet. Newly graduated teachers lack knowledge and experience and cannot expect re-training, but have to train through different ways.

Tuan also dreams of developing an institute for teacher training. The teachers, after finishing the institute, will have good knowledge and skills to teach science subjects in English.

Tuan has successfully defended his project before the Hanoi Education Department. UberMath will become a subordinate subject at schools in Hanoi.