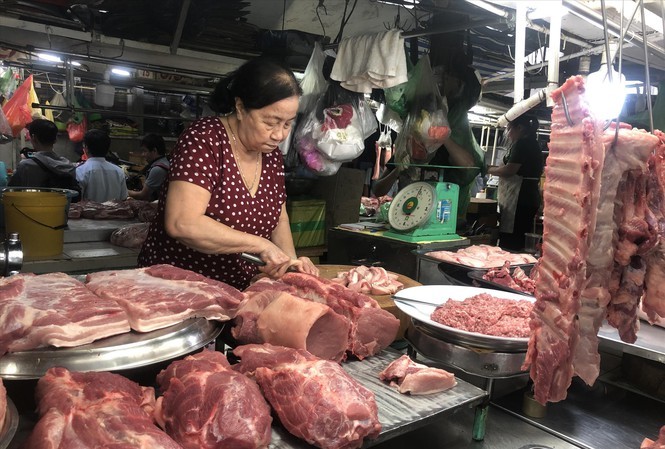 Though the price has decreased, pork stalls at markets remain deserted with very few buyers.

“The supply is profuse but I still cannot sell anything this morning,” Pham Tuyet Van, a seller complained.

“I have a certificate on the origin and quality of the meat. However, people still don’t buy pork these days because of high prices,” she said.

Tran Van Minh, a merchant at Tan Xuan Market, also said that the high price has cut pork sales. The meat supply has improved thanks to the live pigs imported from Thailand. In addition, frozen pork is akso available at some big markets.

However, housewives complained that they cannot find cheap imports anywhere, including supermarkets and convenience stores.

Tien Phong reported that no imports were found at VinMart, VinMart+, Aeon and Big C on January 10. At Aeon, the quoted price was very high: young ribs were priced at VND290,000 per kilogram, while half fat half lean meat VND220,000. At VinMart and VinMart+, the prices were VND249,000 and VND226,000, respectively.

A representative of Big C said the pork distributed by the retail chain is fresh meat from domestic sources and frozen meat. The supermarket affirmed that it has enough pork to sell for Tet days and doesn’t need imports.

The director of a VinMart shop also said most of the meat available in the market is from domestic sources. The supermarket will consider importing meat if the domestic supply is short, but in the immediate time, it will prioritize to sell Vietnamese products.

Meanwhile, MM Mega Market said there is imported pork at the supermarket chain, but the amount is very small, just accounting for 3 percent. This means that 97 percent of pork available there is from domestic sources.

Vietnam to imports 100,000 tons of pork in Q1 to offset shortage

Vietnam would import 100,000 tons of pork in the first quarter this year to stabilize the domestic market and lower pork prices, which have surged since the outbreak of African swine fever.