Why Thai investors decide to pour billions of dollars into Vietnam? 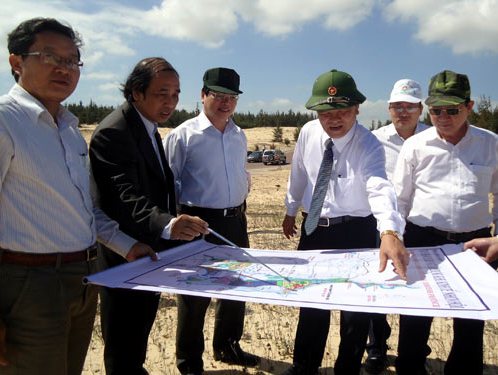 PTT’s executives and Binh Dinh’s officials visit the area where the Nhon Hoi oil refinery would be built.

PTT, the Thai oil and gas group, plans to contribute 30-40 percent of capital into the Nhon Hoi petrochemical complex capitalized at $27 billion in the Nhon Hoi Economic Zone in the central province of Binh Dinh. The other investors would be from the Middle East, South Korea and Japan.

The project is expected to kick off in 2016, while the construction would last four years. Once becoming operational, the oil refinery would have the capacity of 660,000 barrels of crude oil per day, or 30 million tons per annum.

Most recently, the Quang Tri provincial authorities have announced the investment project on developing a 1,200 MW thermopower plant in the locality under the mode of BOT (build, operation, transfer). The investor of the project is EGATI, also a Thai conglomerate.

The total land area reserved for the thermopower plant is 450 hectares. With the capacity of 1,200 MW, the plant is expected to provide the electricity merchandise output of 7.25 billion kwh a year. The BOT project has the duration of 25 years, after which it would be transferred to the government of Vietnam.

Who are PTT and EGATI?

PTT is the Thai oil and gas group operating as a joint stock company with the chartered capital of baht28.6 billion, or $894.7 million, of which the Thai Ministry of Finance holds 51 percent.

PTT holds 65.29 percent of the chartered capital of PTTEP, a Thai oil and gas exploration and exploitation.

EGATI is a power company belonging to EGAT, the Thai electricity agency. EGAT is also a client of PTT.

EGATI has announced its investment strategy in Vietnam under which it would set up 3 thermopower plants in three regions of the country.

PTT is not an unfamiliar foreign partner to the Vietnamese enterprises in the oil and gas sector. PTTEP, a subsidiary of PTT, is now exploiting oil and gas at the Block 16-1 of the Te Giac Trang area. PTTEP contributes 28.5 percent of capital in the project. Besides, it also contributes 25 percent to the exploitation project at the Block 9-2.

PTT has also been known as holding 45 percent of capital of the Vietnam LPG, a joint venture between PTT and Vietnam’s Southern LPG Company.

Meanwhile, the name “EGATI” was once heard two years ago, when it had a working session with the Binh Dinh provincial authorities on a thermopower plant project in the locality.

Analysts have noted that Thai energy conglomerates prove to be very eager to develop power projects in Vietnam. The existing profitable investment activities in Vietnam, plus the forecast that the power prices would increase in the future are believed to be the two main reasons prompting them to pour billions of dollars into Vietnam.

At the 2013 shareholders’ meeting, PTT’s management board said that once the AEC, the ASEAN economic community, is established--slated for 2015, the power prices in the member countries would not get the subsidy from the governments any more.