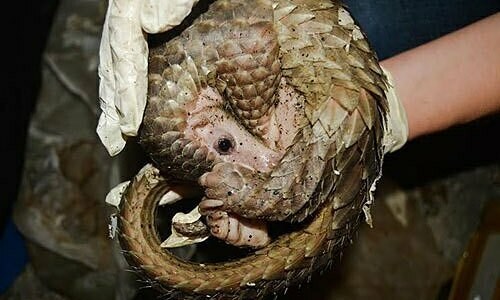 The offender, Tran Quy, is director of Hai Dang Ltd Co., which was licensed to carry out an investment project including tourism services and a wildlife park on the province's Hon Khoai Island.

However, police investigations found that the company did not develop any tourism activities but raised wildlife for sale.

The investigation was conducted following the detection in January 2018 of 114 Javan pagolins and over 300kg of pangolin scales by local border guards. The animals were found on an unregistered boat in waters around Ca Mau.

Agencies examined and inspected the operations of the Hai Dang Ltd. Co., revealing the illegal wildlife trade and trafficking operation.

Quy was a key part of a ring that trafficked wildlife from other countries to Vietnam. Some sources revealed that wildlife traffickers usually chose Hon Khoai island to store the wildlife after they are transported by boats to Vietnam.

Three other offenders involved in this case were also given sentences ranging from two years to 12 years in prison and fines of 50 million VND./. VNA