The plan to increase pork imports to make up for domestic shortages won’t be easy to implement as the global price has increased sharply. 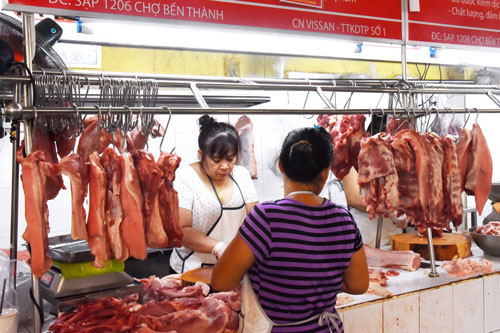 African Swine Fever (ASF), which killed millions of pigs, is the major reason behind the cserious shortage and price escalation. The veterinary quarantine, epidemic control and restriction in pork circulation among localities all caused the local supply-demand imbalance, thus pushing prices up in some provinces.

Also according to the ministry, pork demand is increasing in the last month of the year, while farmers and producers are trying to store pigs and not to sell pork at this moment, hoping that the price would escalate in pre-Tet days.

The General Statistics Office (GSO) reported that the country’s number of pigs in November decreased by 22 percent compared with the same period last year.

MOIT has promised to send inspectors to large-scale livestock facilities to find if the facilities had cornered the market and caused instability to the market by hoarding goods and pushing prices up.

“Serious violations will be subject to heavy administration fines or criminal penalties,” a representative of the ministry said.

MOIT has requested the Ministry of Agriculture and Rural Development (MARD) to instruct producers to supply pork to distributors as committed and reduce the selling prices to help stabilize the market.

The ministry predicted that the pork demand would decrease slightly from now to Tet, by 5-10 percent, in comparison with the same period of the previous year, because of the overly high price.

When the domestic supply is short, the pork imports have increased rapidly. According to MOIT, Vietnam imported 96,000 tons of pork in the first 10 months of the year, worth $108 million, an increase of 101.7 percent in quantity compared with the same period last year.

However, the two-fold increase in imports could not offset the sharp 50 percent decrease in the domestic output and could not cover the demand for the types of meat that people consume during Tet.

According to Doan Ngoc Tho, director of THO Group, European suppliers offer bone and shoulder cut, while the company wants to import lean meat, thigh and stomach meat.

Meanwhile, the CIF price has increased sharply to $4 per kilogram (VND90,000 per kilogram) instead of $2 as seen previously.