Will investors relocate their production bases to Vietnam after Covid-19?

Many international manufacturers are expected to relocate their investments out of China after the epidemic ends. Vietnam is one of the destinations.

When launching an emergency stimulus package on April 7, the Japanese government called for re-establishing supply chains. 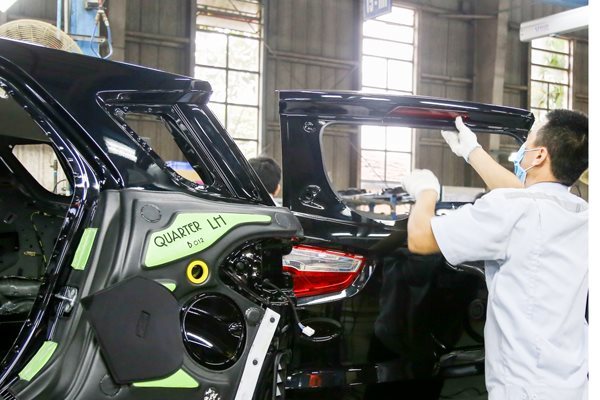 The government decided to reserve 240 billion yen, or $2.2 billion, in the additional budget plan for the 2020 fiscal year to support Japanese companies to relocate factories in their home country or Southeast Asian countries.

Shinji said Vietnam will be one of the destinations for Japanese enterprises to consider because Vietnam is an economy with high growth rate. The country’s risk management capability is highly appreciated by Japanese companies as the government of Vietnam has been controlling the epidemic well.

At present, the adverse impacts of Covid-29 may affect Japanese enterprises’ plans to scale up their business in Vietnam. However, most large Japanese corporations are present in Vietnam and will pour more capital into the manufacturing sector in Vietnam.

Up to 75 percent of enterprises set up in Vietnam in the last five years said they wanted to expand business here, a relatively high proportion compared with the other countries that JETRO has surveyed recently, according to Shinji.

At the same time last year, when asked about the possibility of Vietnam attracting foreign investors in the US-China trade war, Tran Duy Vu, deputy CEO of Kizuna IZ Infrastructure Development, said it would be not easy because of the high attractiveness of the market with more than 1 billion people.

He said China is a global production base which supplies materials to many countries so it would be more expensive for international investors to seek non-China supply sources.

However, after the interruption of the Chinese material supply source because of Covid-19, Vu said, many manufacturers in the world will have to reconsider their strategy and try to ‘put eggs into many different baskets’. That is why Kizuna continues pouring capital in more workshops to receive investors after Covid-19.

VinaCapital had predicted that the US-China trade war would accelerate the process of foreign investors relocating their production bases to Vietnam. And now the epidemic will make the process go even more quickly.

JLL also said Covid-19 may serve as a catalyst to speed up the relocation process after it was accelerated by trade tensions last year. Southeast Asia in general and Vietnam in particular will become more attractive to multinational groups in the future.

COVID-19 outbreak to accelerate relocation wave from China to Vietnam

While COVID-19 will have a negative impact on Vietnam's economic growth in 2020, it will boost the relocation of manufacturing facilities from China to Vietnam.

Vietnam attracted $12.33 billion in foreign direct investment (FDI) in the first four months of 2020, a year-on-year decrease of 15.5 percent due to the impact of the COVID-19 pandemic, according to the Foreign Investment Agency (FIA).