Will the TPP spur another wave of US investment? 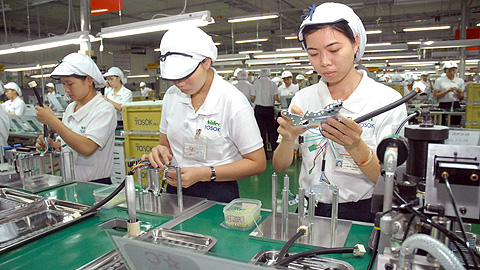 The US is also Vietnam's largest trade partner lagging just behind China, according to the Ministry of Planning and Investment.

However a large number of trade barriers remain between the two countries and many believe these barriers could be eliminated under the proposed Trans-Pacific Partnership (TPP) agreement, which would group Vietnam, the US and ten other nations in a free trade bloc.

There are also those who have suggested that if and when the TPP is approved and comes into full force it would spark a wave of new foreign direct investment (FDI) into Vietnam by US businesses.

Recently, a reporter put the question as to whether the TPP would trigger an acceleration of FDI to into Vietnam to Dr Le Xuan Sang, deputy director of the Vietnam Institute of Economics.

Dr Sang responded by saying that in theory the TPP could help to increase the strength of investment between Vietnam and the US as well as other participating members of the bloc.


However, an increase in investment doesn’t necessarily follow Dr Sang said as the investment decision would depend on a variety of factors the foreign investor would take into consideration.

“A careful analysis would have to be undertaken by the investor to evaluate the business investment environment of Vietnam and the potential benefits the investor could obtain from operating in the country,” Dr Sang said.

In general, foreign investors consider a variety of factors when investing abroad, which include improving their competitiveness, openness to regional and international trade, regulatory environment and the business climate.

Vietnam scores high on competitiveness because of its promising young labour forces with relatively high literacy rates, producing a workforce with the requisite drive and skills for unskilled and factory labor.

As Vietnam is blessed with good geopgraphics it also gets high marks on market openness to regional and international trade. Of critical importance is an investor’s ability to sell its products and services to both local and foreign markets and Vietnam is often viewed by investors as the gateway to Asia.

Investors also look at the regulatory environment or in other words look to see whether a national government enacts and enforces rules and policies aimed at favoring state entities at the expense of privately held firms.

As for business climate, the sheer size of Vietnam’s population and consumer market of 90 million, and the prospects for growth that result from this size is appealing to investors and makes Vietnam an attractive destination for FDI.

In addition, Dr Sang said a prime consideration is the stability of the people in power, the decision makers and whether or not they will stay the same. Vietnam scores high on this criterion, particularly when compared to other countries in the region.

They also evaluate from an internal stratiegic perspective the risk of putting all their eggs or too many of their eggs in one basket.

With a thriving consumer market of 90 million, a track record of healthy trade and stable growth – it is no wonder that Vietnam has in the past attracted a lion’s share of the worlds FDI.

However, Dr Sang couldn’t say whether or not, with any degree of certainty, the TPP would or would not result in a new wave of FDI flowing into Vietnam.

Finally, he mentioned that because Vietnam’s legal framework for business is incomplete with weak enforcement for oversight the nation runs the risk of appealing to investors who are not socially responsible.

An incomplete legal framework and lax prosecution for transgressions for violating laws such as transfer pricing or polluting the environment has a certain ‘attractive’ appeal for FDI from the wrong type of investor, Dr Sang said.