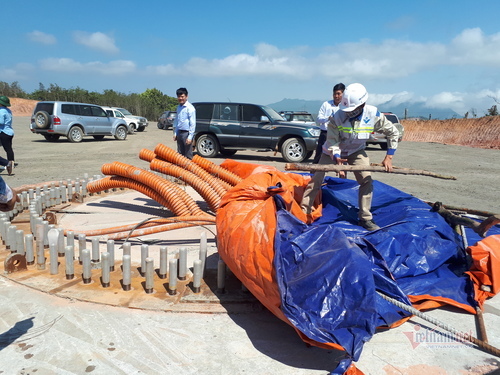 Vo Duy Tan, director of Phong Lieu Wind Power JSC, said at a recent conference held by the Quang Tri provincial People’s Committee that problems in VAT refunds for wind power projects arose after the General Department of Taxation (GDT) sent a dispatch to provincial taxation agencies, noting that investors will only get a tax refund if they have electricity operating licenses.

According to Tan, the input VAT of the entire project is VND151.7 billion and in order to ease pressure on working capital, the company is applying for a tax refund. To get the tax refund, the company has to have an electricity operating license.

The problem is that under the Ministry of Finance's (MOF) Circular 130 dated August 2016, once projects become operational, which means after construction period ends, they will not receive a VAT refund.

“This means that the project will never get a VAT refund,” he said.

Phong Lieu’s project is not the only one facing problems in VAT refunds. Tens of other projects are in the same situation.

Enterprises have asked the taxation department to reconsider the requirement on having an electricity operating license. They have committed to presenting the licenses soon after the projects begin operation.

The delay in tax refunds is expected to cause financial problems for investors and prolong project implementation. In some localities, the amount of proposed tax refunds that have not been settled are up to VND1 trillion.

A tax official said that tax refunds for projects in conditional business fields are implemented under the VAT Law, Government decrees and MOF circulars and dispatches on tightening VAT refund management.

These say that tax refunds won’t be given to enterprises that trade in conditional goods and services and cannot satisfy business conditions in accordance with the Enterprise Law and Investment Law.

At a working session with 13 enterprises implementing electricity projects in Vietnam on March 18, Vu Xuan Bach, deputy general director of GDT, said the agency will try to resolve the complaints from wind power projects.

However, guidance from MOF and GDT on the issue, which the State Audit found as having problems in 2019, still has not been provided.

In a report dated February 12, 2019, the State Audit pointed out an unreasonable point in MOF’s Dispatch on July 30, 2015, which says that VAT refunds won’t be given to enterprises that trade in conditional goods and services and cannot satisfy the business conditions in accordance with the Enterprise Law and Investment Law.

This is not in line with Law No 31/2013/QH13 on amendments to the Law on Value added Tax, because the law does not mention conditional goods and services.

The State Audit also thinks that Item c, Clause 6, Article 1 of Decree 100/2016/ND-CP is not consistent with practice.

The decree doesn’t clearly stipulate the time that taxpayers have to show licenses for operation in conditional business fields.

Many enterprises can’t get licenses if they don’t have sufficient facilities. Once projects are able to meet requirements to get licenses, the projects have already become operational, and therefore, won’t get a VAT refund.

The State Audit proposed removing the regulation on not giving VAT refunds to enterprises that cannot satisfy the business conditions as stipulated in the Enterprise Law and Investment Law.

"The consultation and promulgation of MOF’s Dispatch 10492 / BTC-TCT dated July 30, 2015 on strengthening the management of VAT refund is contrary to the law on VAT refunds," the State Audit stated.

A local taxation agency has proposed that the General Department of Taxation allow tax refunds under the proposal from the State Audit.

An auditing expert affirmed that the circulars by MOF and GDT are contrary to the principle of VAT, which says that once enterprises have paid VAT or borne input VAT in accordance with regulations, they must receive a tax deduction and refund, if any. This principle is applied in most countries.

To date, EVN has signed power purchasing contracts with 113 wind power projects with a total capacity of 6,038MW.