VietNamNet Bridge – Chinese coach Chen Yun Fat and his team will receive a VND1 billion ($50,000) of bonus after entering the final round of the 2014 Women’s Asian Football Cup.

VietNamNet Bridge – Chinese coach Chen Yun Fat and his team will receive a VND1 billion ($50,000) of bonus after entering the final round of the 2014 Women’s Asian Football Cup. 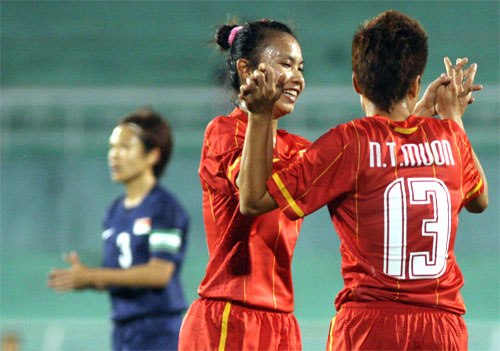 The Vietnam Football Federation (VFF) General Secretary Ngo Le Bang on May 27 said that the VFF decided to give a bonus of VND500 million ($25,000) for the team. In the qualifier round of the 2014 Asian Football Cup, Vietnam won all three matches to enter the finale.

Besides the VFF’s bonus, Eximbank will also grant a VND500 million bonus for the team, raising the total reward to VND1 billion.

The bonus is not high for the men's football, but it is valuable for female players who are paid much lower than their male colleagues. The whole team is very happy and full of optimism after receiving the information. All of them are very determined to play better to win a card to the World Cup in 2015.

The record high prize money for the women's soccer team is at the 2009 SEA Games, when the team received more than VND10 billion from many businesses. However, if they play well in the 2014Asian Cup finals, the bonus may be higher.