Wood chip exports stuck on the way to China

As the biggest wood chip exporter in the world, Vietnam is facing big difficulties.

Businesses in Quang Ngai province alone have 500,000 tons of wood chips in stock which still cannot be exported. 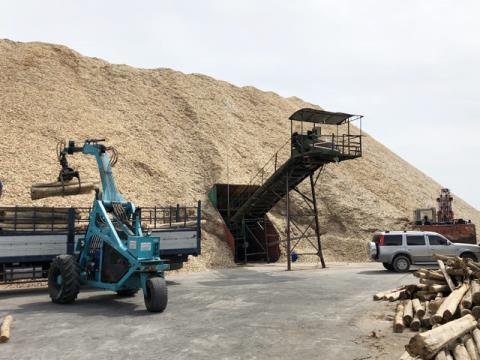 The owner of a well-known enterprise in the province said he mostly exports wood chips to China. However, after a period of high growth, exports have slowed down because of the limited market consumption and increasingly stiffer competition.

“There were several wood chip exporters some years ago, but now Quang Ngai alone has 22 enterprises operating in the field,” he complained.

According to Vinh, the factory now can export 10 tons a month instead of 30.

With the inventory level, if things go as usual, it will take three months to sell out the amount. Meanwhile, in the next three months, tens of tons of wood chips will be put out.

According to the Vietnam Association of Timber and Forestry Products (Vietfores), Vietnam is the biggest wood chip exporter in the world. The supply from Vietnam accounts for 30 percent of total supply all over the globe.

However, as the industry has been hotly developing, this has led to unhealthy competition, forcing export prices down.

Some businesspeople said that some Chinese companies coming to Vietnam take over Vietnamese businesses, hiring Vietnamese to manage the businesses. The companies join forces with each other to curb prices.

Meanwhile, Vietnamese enterprises do not have close links with each other. Quang Ngai is the only province which has an association of wood chip enterprises. There is no organization representing enterprises in the country.

With the problems, though Vietnam is a big supplier of wood chips to the world, it has joined the world market in a passive, not active, mode.

According to To Xuan Phuc from Forest Trends, 60-70 percent of Vietnam’s wood chips go to China, but the market changes all the time, which makes Vietnamese enterprises suffer.

In 2016, the prices of planted forest wood dropped sharply because China suddenly stopped collecting timber. At that time enterprises in Binh Dinh province could not export wood chips for a long period.

Since the second half of October 2017, China stopped collecting wood chips and enterprises in the province had to suspend the production and material collection. As a result, the planted forest wood price dropped dramatically.