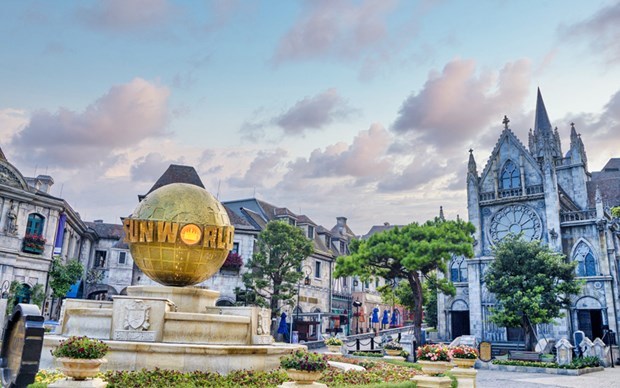 With the hope of creating quality entertainment centres for Vietnamese people and turning the country into a high-end destination comparable to Disneyland, Universal, and Magic World, the Sun Group has developed “Sun World” into an entertainment brand promising unique experiences for visitors.

Sun World Ha Na Hills in Da Nang city marked the start of the “Sun World revolution” in Vietnam. Located on the top of Nui Chua, a charming but also high mountain that has discouraged many investors, just after 10 years, the complex has become a symbol of Da Nang’s tourism with numerous interesting experiences.

After “Cau Vang” (Golden Bridge) in this complex became a “global phenomenon”, in 2019, two out of every three foreigners booking tours of Da Nang asked for this place to be included in their trips.

Lao Cai has continually recorded impressive tourism growth since this complex was put into operation. The province welcomed 2.78 million visitors and earned over 6.4 trillion VND (nearly 280 million USD) in tourism revenue in 2016. The respective figures reached 4.25 million and 13.4 trillion VND in 2018.

Meanwhile, a theme park and a water park will be built by the Sun Group on the banks of the Do River in Sam Son city, central Thanh Hoa province, forming part of a resort and entertainment complex there. They are expected to add to the list of world-class entertainment centres in Vietnam.