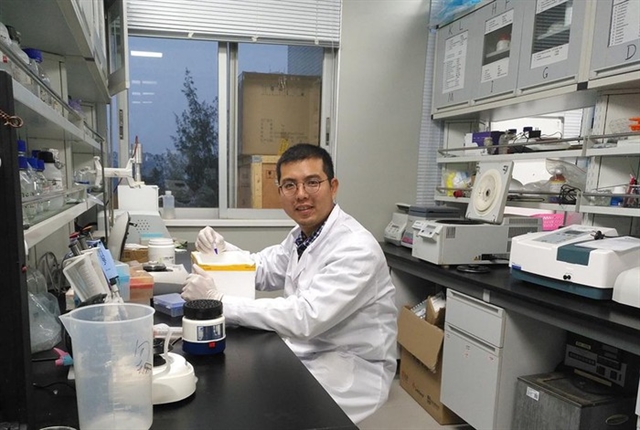 Tuấn in his office where he wrote dozens of scientific articles published internationally. — Photo vietnamnet

The awards, which are given out annually by the Việt Nam Youth Union and Ministry of Science and Technology, aim to discover new talent and stimulate a passion for technology and science research among young people.

He graduated from high school in 1994 when intensive aquaculture was expanding in Cửu Long (Mekong) Delta region.

“I decided to study fishery pathology at Cần Thơ University because I thought I could easily find a job after graduating,” the 36-year-old scientist told online newspaper vietnamnet.vn.

“But the more I studied, the more I found the subject very interesting and suitable to my strengths,” said Tuấn.

After graduating, with his knowledge in aquaculture, Tuấn and some friends opened a shrimp farm in his hometown.

But a few years later, he quit the farm to continue his studies in aquaculture.

During his master’s degree, Tuấn met a Chinese professor in aquaculture studies who then became his tutor for a PhD at China’s Huazhong Agriculture University.

At present, Tuấn is doing a post-doctorate degree at Shantou University in Guangdong, China.

His current field of research is investigating the diversity of intestinal microbiology systems and interactions with immune systems of fish and other aquatic animals.

The intestine is one of main gateways for pathogens to enter the body.

Tuấn’s research has proved valuable in producing medicines for fish and aquatic animals.

“I had to read thousands of documents and articles relating to my field to find my own ideas,” Tuấn said.

“Once an idea came, I got started immediately. Because if you were late, someone else might be doing the same and post articles first,” he said.

He was always conscious of working hard.

He actively participated in scientific conferences and seminars to meet researchers in the same field and learn of new trends.

“Actually, I was satisfied with my current scientific achievement. But I really wanted the following research to be better than previous ones,” he said.

According to Tuấn, a scientist needs enthusiasm, creativity, co-operation and honesty.

“I always remember my professor saying that ‘if you decide, you should follow the goals to the end’. His words became the guidelines for my scientific pursuits,” he said.

Tuấn said that he was born in a farming family, so the concept of scientific research was strange for him when he was young.

“I just started to learn about scientific research. There were lecturers who inspired me to pursue the path,” Tuấn said.

“If I wasn’t a scientific researcher, I would have been a farmer,” he added. VNS