14 types of fees imposed on a chicken

VietNamNet Bridge – The overlapping fees in the poultry industry have increased the cost of production and circulation.

VietNamNet Bridge – The overlapping fees in the poultry industry have increased the cost of production and circulation. 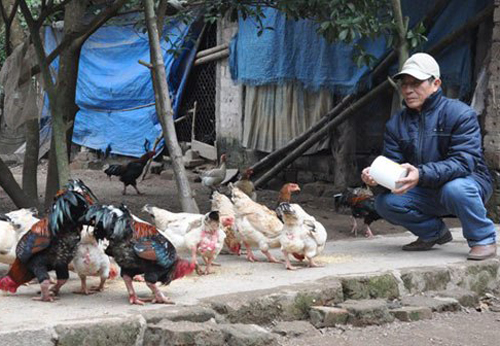 "Chicken has to bear up to 14 kinds of charges and fees," said the CEO of a big livestock corporation.

Nguyen Van Truc, CEO of the Saigon Agriculture Corporation, said there were quarantine fees for newly hatched chicks, a quarantine fee for exporting chickens from farm in a province to another, and fees for slaughtering, disinfection and sterilization.

He said that breeders even had to pay a fee for collecting water samples for testing disease in poultry.

Truc said that poultry farms should use a closed production chain (from hatching to breeding chicken, slaughtering and processing) so that quarantine fees would be charged on the input (chicks) and the final output (processing).

Pham Quoc An, Chairman of a livestock cooperative in Lao Cai, said that it is unacceptable that the licence for exporting eggs from a province to others is only valid for one day.

An said farms and farmers who want to sell eggs within the district need to have veterinary hygiene stamps and an additional quarantine documents for transporting chickens out of the district. However, this document is valid for one day only. However, it is not easy for them to get the licence because sometime the staff of the veterinary station are absent.

Ms. Nguyen Thi Hang, Vice President and General Secretary of the Vietnam Apiculture Association, said that according to the regulations of the Ministry of Agriculture in 2005, quarantine documents are needed for transporting over 200 kg of honey or a group of bees from one district to another.

She estimated that with an output of 45,000 tons of honey annually, a total of 225,000 licenses are needed to move honey out of districts.

The Minister of Agriculture and Rural Development has asked relevant bodies to check the fees and charges applied on poultry and bee honey.