The northern mountainous province of Ha Giang has directed specialised agencies to implement the planning and conservation for five local special-use forests at a total investment of over VND431.8 billion (US$19 million).

The northern mountainous province of Ha Giang has directed specialised agencies to implement the planning and conservation for five local special-use forests at a total investment of over VND431.8 billion (US$19 million). 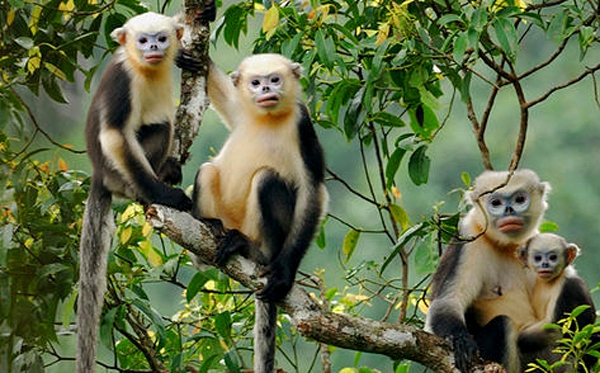 As a northern mountainous province with forest coverage and land for forestry development accounting for over 71% of the province's natural land area (about 554,140 ha), the protection and development of forest resources is vital to Ha Giang’s socio-economic development.

In recent years, Ha Giang has been known as a locality with extensive rare fauna and flora species, many of which are precious medicinal plants and particularly the Tonkin snub-nosed monkeys, which are among one of the most endangered species of primate in the world that have been listed on the IUCN Red List for urgent protection.

The total planning area for the conservation and development of the five mentioned-above forests is over 52,400 ha, aimed at protecting the biodiversity of plant and animal species on Vietnam’s and global red lists.

According to statistics, currently in five special-use forests in Ha Giang, vegetation includes 228 families, 1,098 genera and 2,591 species with 182 rare species, of which 154 are listed in Vietnam's red book, such as Calocedrus rupestris and Peliosanthes teta.

Particularly for fauna species, conservation planning will cover 29 families, 89 genera and 329 species of rare animals, such as the Tonkin snub-nosed monkey, the stump-tailed macaque and tortoises.

The planning, conservation and development of five special-use forests in Ha Giang is expected to form a scientific basis for nature preservation and promotion of ecotourism, thus promoting socio-economic development in the buffer zones of the protected areas in the near future.

This is also a strategic goal to protect biodiversity and conserve rare and precious national and international gene sources.

In recent years, thanks to support from the Fauna & Flora International (FFI) on nature conservation in general and the Tonkin snub-nosed monkey protection in particular, the Ha Giang Forest Protection Department has promoted biological patrolling and monitoring in all special-use forests, as well as collecting biodiversity data and forming information about activities that harm species in such local forests.

In addition, public raising campaigns have been held to raise locals’ awareness on the importance of protecting wild fauna and flora species.

Locals in districts with special-use forests have been encouraged to hand over hunting guns, explosive materials and wildlife traps.

Self-managed units in forest management and protection and forest fire prevention and control have been strengthened, particularly in localities with forest coverage and areas where special-use forests are located.