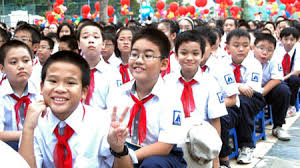 The students of the Hanoi-Amsterdam High School for the Gifted

Steven Foster, an international expert who was a panel speaker at seminars on positive discipline in Vietnam held recently by Gateway and Sakura Montessori Schools, said many parents who physically punish children love their children but do not have the knowledge and skills to love properly.

Dang Hoa Nam from the Ministry of Labor, War Invalids and Social Affairs (MOLISA) cited a report as saying that 300 million children in the world aged 2-4 regularly bear physical and psychological discipline, and 1.1 billion people believe that physical punishment is a necessary method to educate children.

In Vietnam, 68.4 percent of children aged from one to 14 incur at least one type of sanction, physical or mental, from family members.

The report released by the General Statistics Office (GSO) at a conference in response to the global initiative to end physical abuse against children at home and school in November 2017 showed that 74 percent of Vietnamese children aged 2-14 are punished by physical means by their parents or other family members or baby-sitters. Twenty four percent of married women said that their husbands once used physical abuse against their children.

However, the figures just show the tip of the iceberg. Child abuse with brutal sanctions takes place quietly in many families. The children’s physical and emotional damage are being left open.

Foster, who has 20 years of experience in training positive discipline and early education in the US and China, commented that teachers and parents need to learn how to know the limit of discipline.

He said positive discipline needs to be built on the basis of respect and understanding between parents and children, and parents need to use both love and persistence at the same time.

According to the expert, 60 percent of parents who were asked ‘what does discipline mean?’ gave answers related to punishments.

When educating children, parents hope children can obtain certain life skills. However, insults and rods will not help children learn the skills because the punishments instill fear.

In addition, physical abuse has an unintended consequence on how the brain operates. Children who have had a history of violence for a certain period of time mainly use the brain to survive rather than think.

The issue is a hot topic on education forums. Parents believe that children need corporal punishment so they will not forget their faults and repeat mistakes in the future, but others are against the idea.