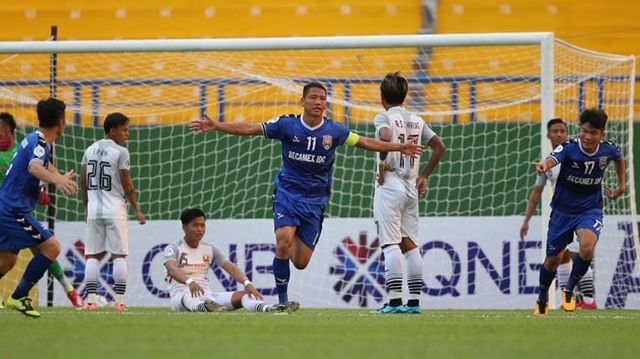 The inspiring 2-1 victory in the first leg solidified Becamex Binh Duong’s confidence while playing host to the Myanmar representatives for the second leg on Tuesday.

With the home-field advantage, manager Nguyen Thanh Son’s troops proactively put pressure on the opposite side right from the first whistle and promptly went ahead after just five minutes thanks to captain Nguyen Anh Duc’s strike.

The former V.League champions came close to doubling their lead 15 minutes later, as Anh Duc drove a powerful shot forcing Shan United keeper Myo Min Latt to parry the ball. However, they had to wait only five more minutes to celebrate their second goal, with Anh Duc feeding To Van Vu to beat Myo Min Latt from a distance of 18 metres.

Trailing two goals behind, Shan United intensified their attacks seeking to reduce the score. The guests almost pulled a goal back before the break, as Zin Min Tun lobbed the ball over Binh Duong goalie Pham Van Tien only to see his effort denied by the crossbar.

The US forward Victor Mansaray netted an impressive hat-trick in the 46th, 60th and 63rd minutes, before Ali Rabo wrapped up their lopsided game with the sixth goal in the remainder of the match.

With the fabulous win, Becamex Binh Duong temporarily stood second in Group G and continued to foster their hopes of vying for a direct berth in the 2019 AFC Cup ASEAN Zonal semifinals, to be awarded to the group leaders.