The Foreign Ministry of Vietnam and the administration of the Australian state of Victoria signed an agreement on March 9 to facilitate connectivity and cooperation between Vietnamese localities and Victoria.

The Foreign Ministry of Vietnam and the administration of the Australian state of Victoria signed an agreement on March 9 to facilitate connectivity and cooperation between Vietnamese localities and Victoria in the fields that both sides are interested in and Victoria is strong at. 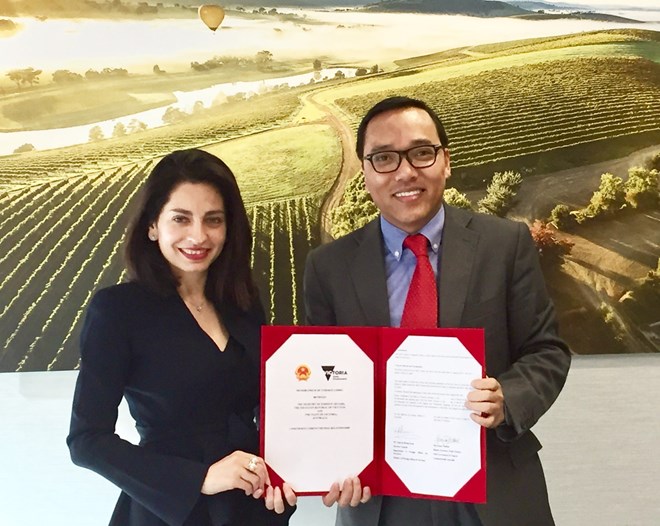 The deal was inked in Melbourne, the capital city of Victoria, by Director of the Vietnamese ministry’s Department of Foreign Affairs of Localities Nguyen Hoang Long and Deputy Secretary of Victoria’s Department of Economic Development, Job, Transport and Resources Gonul Serbest.

The agreement is expected to create conditions for enhancing connectivity and increasing support for effective cooperation between Vietnamese localities and Victoria in such areas as administration-to-administration ties, people-to-people exchange, trade, investment, education-training, science-technology, smart city building, agriculture, tourism, and services.

During his stay, Director Long also attended and delivered a speech at a meeting on introducing the business environment in Vietnam. The event saw the presence of Australian Ambassador to Vietnam Craig Chittick, Australian Consul General to Ho Chi Minh City Karen Lanyon, and President of the Australian Chamber of Commerce in Vietnam Chau Ta.

The Vietnamese delegation had working sessions with the agencies for external affairs of Victoria and Melbourne, the Business Council of Australia, and some Australian enterprises. They also visited the University of Melbourne, Monash University, and RMIT University.-VNA