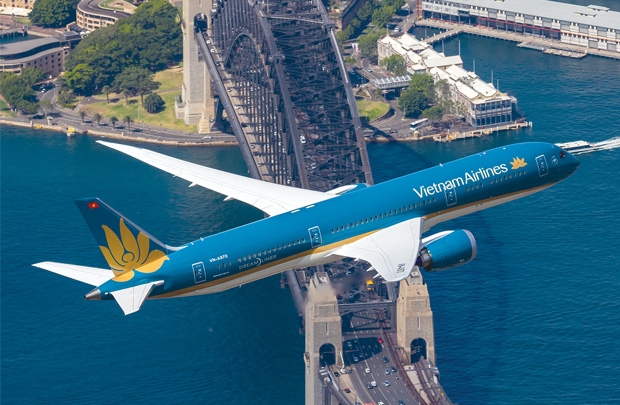 Official reports all show the hot growth of the aviation sector in recent years. About 50 million passengers went through airports in Vietnam, an increase of 30 percent over 2015.

The budget airline boom has made it cheaper and more convenient to travel. It is estimated that 50 percent of passengers last year flew with budget airlines.

According to the flight management and air traffic control agency, the Hanoi – HCMC backbone air route ranks seventh among the world’s 10 busiest air routes. It is also the major domestic air route. There are up to 700 flights on the route daily.

Tan Son Nhat International Airport in HCMC  is reported as having 32 million passengers per annum though the capacity is 25 million.

It is estimated that the demand on domestic air routes this summer will increase by 30 percent. The national flag air carrier Vietnam Airlines has decided to provide 4,700 more flights this summer.

Tan Son Nhat Airport has to apply a new flight operation policy to ease traffic congestion which forces aircraft to hover in the sky queuing up for landing.

As Tan Son Nhat cannot receive more than 42 flights an hour, hundreds of flights were canceled in the first week of July.

Passengers have been advised to check in automatically to minimize the inconvenience. At Tan Son Nhat, there are 25 check-in kiosks at the domestic terminal and 13 at the international terminal.

IATA has predicted that Vietnam will become one of the fastest growing aviation markets in the world. In 2014-2017, the number of international passengers grew by 6.9 percent per annum and cargo transport by 6.6 percent.

In the domestic market, according to CAAV, the two-digit growth rate will be maintained next year.

With reported figures, it is understandable why more investors decided to inject money in the aviation sector.

In the latest news, FLC, a real estate developer, has also asked for permission to set up an airline, while Air Asia has once again attempted to join the Vietnamese market despite three failures.

Vietnam plans to put into operation 26 airports by 2020, including 10 international airports and 16 domestic ones.

Vietnam has 21 airports, but only Noi Bai and Tan Son Nhat have been used effectively. They serve 75 percent of total passengers.

Vietnam Airlines may open direct flights to US next year