For many years, people in the communes of Thuong Tin district in Hanoi have suffered from bad odors,smoke, dust and dirt caused by the burning of rags in the craft villages. 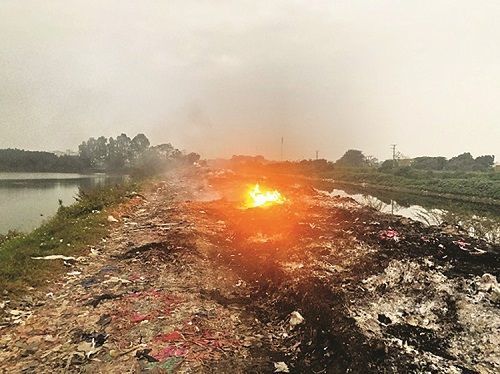 In Duong Hien hamlet of Hoa Binh Commune and Nhue Giang hamlet of Hien Giang commune, people collect scraps of fabric from everywhere for classification. The pieces of cloth will be sold to Trat Cau Village’s people for making blankets and pillows. Waste fabric is piled up on the banks of the Nhue River dyke and burned, usually in the afternoon or at midnight.

According to the Hanoi Department of Natural Resources and the Environment, about 1 million tons of straw and agricultural by-products are produced every year in Hanoi. Of this, 37 percent is burned by people o the fields or dyke slopes.

At 4-8 pm every day, people from Hoa Binh commune carry scraps of fabric to Duong Hien dyke, where they gather them in big piles and burn them, creating columns of black smoke with a bad smell.

Local people complain that they suffer from the smell every day. The only thing they can do is stay home, close doors and windows, or go out with protective masks. On the days when the weather is dry or humid, the dust cannot escape, the large area is covered with smoke, and people have no fresh air to breathe.

Chair of Hoa Binh commune People’s Committee Nguyen Van Hoc said that this had been a heady problem for the locality for many years. There are 44 households in the commune earning their living by collecting and classifying fabric. At some moments, the amount of waste fabric is up to several tons.

“People mostly burn fabric at night. Therefore, it is difficult to catch them redhanded and prevent the behavior,” he complained.

In fact, Hoa Binh and Hien Giang communes and waste treatment companies have signed contracts on collecting waste for treatment. However, the amount of money people have to pay to treat tons of fabric is high, so many households do it in an underhanded way.

According to Vu Van Giap from Bach Mai Hospital, the number of patients hospitalized due to cardiovascular and respiratory causes on days when the air quality is bad is higher than usual.