Airlines queuing up for take-off 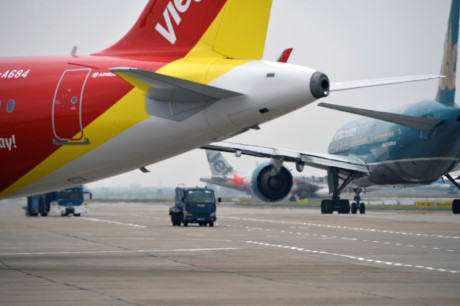 2016 was considered a successful year for airlines. Vietnam Airlines reported it served 20.6 million passengers and carried 264,000 tons of cargo in the year and earned revenue of VND76 trillion, an increase of 10 percent over the year before.

Le Dang Doanh, a renowned economist, commented that the Vietnamese aviation market still has great potential for investors to exploit.

The Vietnamese population has been increasing rapidly, and is expected to reach 103-105 million by 2030. The expansion of the middle-class and deep international economic integration will lead to the higher demand for air travel.

Meanwhile, though the ratio of flights per capita in Vietnam remains very low compared with that in other regional countries.

Investors, realizing the great potential of the market, have decided to pour money into airlines.

In late March, the international press reported that Malaysian Air Asia was considering establishing a budget airline in Vietnam under the mode of a joint venture with Vietnamese partners

The airline is expected to take off in early 2018, according to Air Asia.

In late May, FLC Group, a real estate developer, surprised the public when announcing a plan to establish a new airline called Bamboo Airways.

FLC said unlike other airlines, its new airline will focus on exploiting direct air routes from international points to Vietnam’s tourism sites, from large cities to tourism destinations and tourism sites.

FLC’s spokesman said this would be a ‘hybrid’ airline, something between the traditional and budget airline, aiming to satisfy requirements from different groups of passengers.

Prior to that, in May 2017, Vietstar Airlines sent a dispatch to the government, once again requesting to grant a license for air transport.

Vietstar Airline was established in April 2010 with charter capital of VND400 billion.

Nguyen Duc Cuong, chair of the Vietnam Aerospace Association (VASA), warned that the appearance of new airlines will put pressure on infrastructure, especially when Tan Son Nhat in HCMC and Noi Bai in Hanoi are getting overloaded.

“If the infrastructure is overloaded, airlines will face restrictions in number of flights and flight time,” Cuong said, adding that though new airlines want to take off soon, the problems in infrastructure may hinder their plans.

Therefore, airlines should target niche markets, exploiting airport infrastructure in some provinces, where airports have not been built. This will avoid competition with big airlines and make the most of their advantages.