VietNamNet Bridge - The strange creatures appeared in Kien Hai district of the southern province of Kien Giang after the Lunar New Year. They produce poison that kills fish.

VietNamNet Bridge - The strange creatures appeared in Kien Hai district of the southern province of Kien Giang after the Lunar New Year. They produce poison that kills fish. 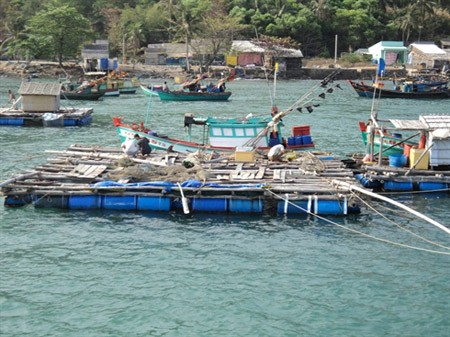 Mr. Nguyen Van Thanh, Director of the Kien Giang Aquaculture Department, said that the strange creatures are as big as fingers, 10-15cm long, with a lot of mucilage on the body.

They cling around the fish cages in the island communes of Hon Tre, Lai Son, Nam Du and An Son in Kien Hai District. The toxin produced by these creatures makes fish blind, weaken and finally die.

According to fishermen, the strange creatures are not parasitic on fish but they densely cling around the fish cages only at night. When the sun rises, they disappear.

The local authorities have sent samples to the Institute for Aquaculture 2 and the Can Tho University for examination.