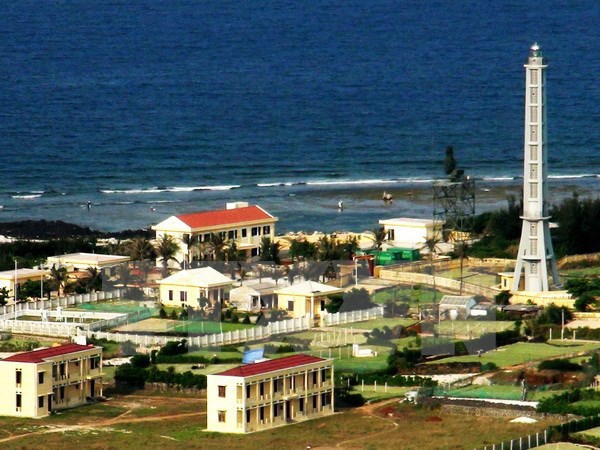 An ancient house of the Nguyen clan in Tay hamlet, An Vinh commune, Ly Son island district, is aged over 200 years. According to the elders, more than 200 years ago, many affluent families here bought timber from the mainland and hired ships to transport it to the island to build three-compartment houses with roofs made of thatch or leaves.

The main compartment has many wooden doors connected tightly with rafters and pillars. The house owner had invited carpenters from Kim Bong carpentry village in central Quang Nam province and engravers from the central province of Thua Thien-Hue to Ly Son Island to build the house in five-six months.

Almost all ancient houses on Ly Son Island are worshipping houses of clans. Three-compartment houses are carved and decorated with a number of colourful horizontal lacquered boards and parallel sentences. Every year, these worshipping houses host ceremonies to pay tribute to the ancestors who set sail into the East Sea to plant markers confirming the country’s sovereignty over Hoang Sa and Truong Sa archipelagos.

The Le Ly family in Dong hamlet, An Hai commune, is living in a 150-year-old ancient house, which is rested on 42 pillars. In the past, the house’s roof was made of thatch, which has become less popular through years, so the house nowadays is roofed with earthen tiles. Mr. Ly said ancient houses always have moderate temperature (cool in summer and warm in winter), they are also quiet.

A carved pattern depicts a horse transforming into a dragon on the wooden door of Mr. Duong Phap’s ancient house in Tay hamlet.

According to Dr. Doan Khoi, Deputy Director of the Quang Ngai General Museum, the ancient house system on Ly Son Island was dated 150-200 years ago. Since they were not affected by wars and islanders are highly aware of preservation, these ancient houses have their architecture fully maintained.

According to Khoi, it is necessary to have a master plan recognising the value of the ancient houses for preserving, studying and serving tourism. The Ministry of Culture, Sports and Tourism is proposed to soon rate the complex of ancient houses in Ly Son island district as a national relic so that it can be served as a legal foundation to activate long-term preservation.

Besides the system of ancient houses, ancient communal houses on Ly Son Island host ritual ceremonies to commemorate the Hoang Sa soldiers who came from various clans and pay tribute to their contributions, creating an ancient and solemn space in the hometown of the Hoang Sa Flotilla.