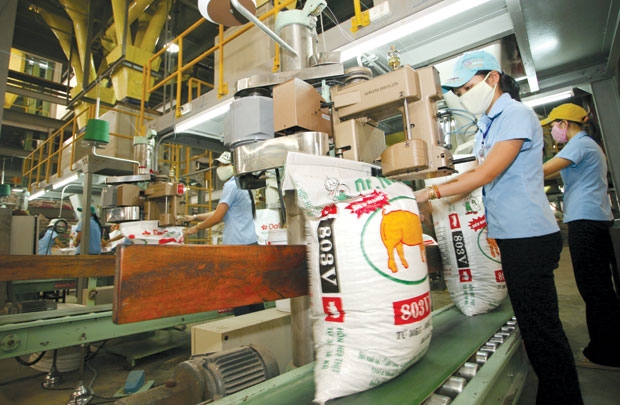 A report showed that in 2012, CP Vietnam held 18.8 percent of the Vietnamese $6 billion animal feed market share, while Proconco, a joint venture between a Vietnamese company and a French partner held 10.8 percent and Cargill Vietnam 6.7 percent. Greenfeed and Anco held 4.4 percent and 2.2 percent, respectively.

However, the market has been remapped recently, especially after the big changes that occurred in 2015. Masan, through its subsidiary Masan Nutri-Science, has acquired 52 percent of Proconco’s and 70 percent of Anco’s stake.

The animal feed market proves to be so attractive that even Hung Vuong, a seafood company and Hoa Phat, a steel manufacturer, have also jumped into it.

They also noted that the positions may change in the future as manufacturers still have been expanding their production by building new workshops or taking over other companies.

Hung Vuong Seafood at its 2016 shareholders’ meeting stated that it would pay higher attention to the animal feed sector this year.

VTF hopes that its capacity would reach 2 million tons a year by the end of the year, which would turn it into the second largest company, just to CP, in Vietnam.

Masan also puts high expectations on the animal feed production. In a press release in April 2015, Danny Le, CEO of Masan Nutri-Science stated that the company plans to acquire 50 percent of the market share in Vietnam.

There are 239 animal feed processing factories throughout the country, including 59 foreign invested factories, which put out 60 percent of total animal feed output in Vietnam.

However, only CP, Hung Vuong and Masan in the near future can follow the 3F closed production process.

CP, after 20 years in Vietnam, has one corn processing plant, which provides materials for farming, six animal and poultry feed factories, and three aquatic feed factories with total capacity of 3.8 million tons.