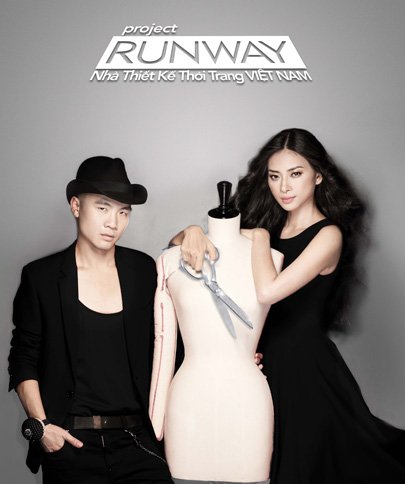 Van has released hit albums and starred in Dong Mau Anh Hung (The Rebel), Bay Rong (Clash) and Ngoc Vien Dong (Pearls of the Far East) and Rouge, a 13-part TV series produced by MTV Asia & MediaCorp Singapore and was broadcasted widely in Asia and Australia.

Van won “Best Actress” for her role in Ngoi nha ma am (The haunted house) at the 15th Vietnam Film Festival in 2007 and was also the winner of Dancing with the Stars reality show in Vietnam in 2010.

To accompany Van is popular Hanoi designer Do Manh Cuong who was on the jury of Vietnam’s Next Top Model contests in 2011 and 2012.

Van, Cuong and a representative from Harper’s Bazaar magazine will be the three judges of this year’s Project Runway.

Vietnamese aged 18 who wish to become professional fashion designers are invited to take part. Deadline for registration is March 10 in HCMC and Hanoi with auditions to take place next week.

Further information can be found at www.projectrunway.com.vn.

New art gallery in Hoi An

Visitors have a chance to admire artworks of the show ‘Tao hinh va tao bong’ of Mello and Pham displayed in Geneva a decade ago.

Visitors will see Pham’s talents in bright color tones and synthetic materials and techniques. Meanwhile, Mello brings to the show colorful artworks, depicting his perceptions about Eastern culture on many types of papers.

Ngoc is striking with bright and vivid colors. The harmony of the artists presents different perceptions from varied cultures and generations.

The Commission’s plan will get a lending hand from the Department of Culture, External Relations and UNESCO of the Foreign Ministry.

UNESCO Vietnam’s General Secretary Pham Cao Phong said the year 2013 will be a milestone year to promote Vietnam ’s images to the world through a series of Vietnamese week events.

“We will partner with Vietnamese relevant agencies in Italy, Canada and Japan to launch Vietnamese weeks there,” added Phong, who is also Head of the Department of Culture, External Relations and UNESCO.

He underlined the important role played by cultural diplomacy in furthering the country’s relationship with other countries.

Phong also talked about a plan to celebrate the 10th anniversary of the 2003 Convention for the Safeguarding of the Intangible Cultural Heritage to be held in the northern province of Quang Ninh as an important event of cultural diplomacy this year.

He stressed the need to pay more attention to raising public awareness of cultural diplomacy as a foundation for development.

Reviewing the sector’s achievements in 2012, Phong mentioned a broad range of activities, such as the inauguration of statues of President Ho Chi Minh in Argentina, Laos and Thailand, and the organisation of friendship year marking Vietnam’s relations with Laos, Cambodia and the Republic of Korea.

Last year, Vietnam gained UNESCO’s recognition for its two more heritages, including Buddhist Sutras-printed woodblocks kept in Vinh Nghiem Pagoda in the northern province of Bac Giang and the worship rituals dedicated to Hung Kings in the central midland province of Phu Tho.

The national Chau Van (spiritual singing) festival has gathered more scientific grounds for the compilation of a dossier seeking UNESCO’s recognition of the traditional singing genre as an Intangible Culture Heritage of Humanity.

The festival, which wrapped up in Sam Son town, the central province of Thanh Hoa, on February 27, saw performances selected from 11 cities and provinces known for the fork art, such as Thai Binh, Nam Dinh, Dong Nai, Hanoi and Binh Phuoc.

Chau Van was created during the Tran Dynasty (1225-1400) and northern Nam Dinh province is considered its birthplace.

The highly rhythmic and trance-oriented form of singing often accompanies “hau dong” (mediumship) during the rituals to honor the Mother Goddesses and connect to other gods. It is performed mostly at temples and pagodas.

The music and poetry performed in the folk art are mingled with a variety of rhythms, pauses, tempos, stresses and pitches. The genre has also adopted folk songs from the uplands and highlands of the North, Centre and South. The main musical instrument used in the genre is Dan Nguyet or moon-shaped lute.

Earlier, the Vietnamese Ministry of Culture, Sports and Tourism put Chau Van in the list of national intangible cultural heritages.

Film screenings will begin in HCM City this weekend to prepare for the annual Golden Kite Awards ceremony to be organised by the Vietnam Cinematography Association.

Produced by State-owned film studios, Dam Me and Lac Loi dwell on the topics of love, family and social problems.

Before being nominated for the best film category at Golden Kite, Thien Menh Anh Hung received the Jury Prize at the International Film Festival in Hanoi last year.

Female director Pham Nhue Giang of Hanoi is a nominee for best director for the social drama Lac Loi.
Giang won the Golden Lotus for Best Movie in 2002 from the Ministry of Culture, Sports and Tourism for her production, Thung Lung Hoang Vang ( Deserted Valley ).

The Frenchman will perform together with the Vietnam National Symphony Orchestra under the
baton of conductor Honna Tetsuji to deliver some Mozart pieces.

Vietnam Film Festival opened in Western Australia on Tuesday to celebrate the 40th anniversary of the establishment of diplomatic ties, reports VietnamPlus.

At the opening ceremony, Vietnam’s consul general in Perth Le Viet Duyen highlighted the growing relations in the fields of economics, politics, education and training, science and technology, security and national defense, especially since 2009.

During the festival, Vietnamese films such as Vietnam tren duong phat trien (Vietnam on the way to development) and Chuyen cua Pao (The Story of Pao) will be shown at the Northbride Piazza Center in Perth.

Vietnam is the 19th trade partner of Western Australia with total trade turnover reaching A$800 million in 2012. Currently, there are nearly 15,000 Vietnamese living in Western Australia including 2,000 students.

The creepy movie sees the whole of New York City is a state of panic when a nest of giant mutant spiders is discovered after a Soviet space station crashes into a New York subway tunnel.

The government fails to take control of this deadly species, leaving Jason (Muldoon), a security guard at the subway, thrown into a battle of wills against the main spider leading this invasion, to protect his family as well as the city.

2013 Red Spring Festival to be held in early March

The National Institute of Haematology and Blood Transfusion (NIHBT) will organise the sixth blood donation campaign, known as the Red Spring Festival, at the Hanoi's My Dinh National Stadium, on March 3.

Prof Nguyen Anh Tri, NIHBT Director and head of the organising board, said that the sixth Red Spring Festival, themed “Share Red Blood – Give Hope”, is expected to attract about 20,000 volunteers, in which 10,000 volunteers will donate about 7,000 blood units.

Ngo Manh Quan, a member of the organising board, said that the Spring Festival 2013 will have diverse activities, including  “Forever in Love” music festival and a street stage, “Dragon and Phoenix Gather” programme, “Humane Street – Give Love” camp, a ceremony to honour volunteering mothers, and a red spring gala evening.

Over the past five festivals from 2008 to 2012, the festival attracted thousands of donors and received 23,072 blood units.

Nearly 100 photos showing Japan before and after the recent tsunami and earthquake are on display at an exhibition which opened at the Vietnam Museum of Fine Arts in Hanoi on February 27.

The event is being held by the Vietnam Museum of Fine Arts in coordination with the Asahi Shinbun Newspaper and Mitsubishi Corporation (Japan), under the sponsorship of the Japanese Embassy, the Japanese Business Association in Vietnam and the Vietnam-Japan Human Resources Cooperation Centre (VJCC), as part of activities to celebrate the 40th anniversary of Vietnam-Japan diplomatic ties and mark the second anniversary of the earthquake and tsunami in eastern Japan.

These photos were take by reporters from Asahi Shinbun Newspaper, depicting the devastation and collapsed structures after the disaster on March 11, 2011 in three eastern provinces of Japan, as well as efforts of local people in reconstruction, with timely assistance from the Japanese and Vietnamese governments since the earthquake hit the region.

The exhibition will run until March 4. The organizing board will put on a seminar and a talk with Japanese speaker Nobuyoshi Nakamura – journalist from Asahi Shinbun Newpaper, who reported from the earthquake-hit region at 6pm on March 11.

Antique kimonos to go on display in Hoi An

A collection of antique kimonos will be on display at Kisetsu, a shop on Nguyen Thai Hoc Street in the ancient city of Hoi An, through March 25.

Yoko Ishikawa, the shop owner, contributed five of her own 100 antique kimonos to the exhibition.

“I will also display yukata (cotton kimono), kimono jackets, wallets, handbags, scarves and t-shirts that I created from vintage kimono at the exhibition,” she said,” I’ve transformed obi (kimono belts) into colourful handbags and handkerchiefs.”

The 37-year-old Japanese entrepreneur, who has lived in the central tourism hub since 2011, also plans to show the garments for Vietnam-Japan Day in August.

A painting exhibition was held in the Central Highland city of Da Lat on February 28 to showcase works created by Japanese politicians, artists and economists.

The event, jointly held by the Japanese Akita Club of America (JACA) and the Japan-Vietnam Cooperation Club, was part of activities to celebrate the 40th anniversary of the two countries’ diplomatic ties.

The exhibited works featured the beauty of the people and landscapes of Japan, as well as Japanese traditional festivals.

The exhibition is expected to strengthen bilateral friendship and cooperation in the future, said Noro Akihiko, former governor of Mie prefecture and member of JACA.