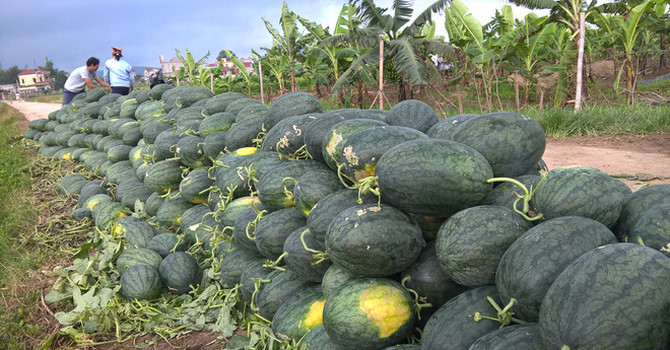 In 2015, Vietnam ranked third among the five biggest vegetable & fruit producers in SE Asia. However, Vietnam’s fruit exports have been too reliant on dragon fruit and the the Chinese market.

A report of Fine Fruit Asia showed that 82 percent of Vietnam’s fruit export value comes from dragon fruit, while 91 percent of the demand is from China. But China is an extremely unstable market.

Most of the Chinese buyers are intermediary merchants who collect fruits irregularly. The exports will be more stable only if Vietnamese exporters can approach Chinese businessmen who distribute products directly to consumers.

Therefore, ministries and branches have to call on domestic consumers to buy the unsold products to rescue farmers who have produced bananas, dragon fruit, water melon and pork.

Local newspapers have shown images of trucks laden with fruits getting stuck at the border gates as China was importing products in limited quantities.

Nigel Smith, CEO of Fine Fruit Asia, said at a workshop held several days ago that it is the heavy reliance on one product and one market which has affected Vietnam’s agriculture.

Meanwhile, the domestic market is not well organized, with big problems in the distribution channel. This is why farmers have to sell pigs at very low prices while consumers have to buy pork at high prices.

Households, which organize production on a small scale, remain the major production force in Vietnam’s agriculture. This leads to unstable relations between producers and exporters.

As a result, exporters mostly target markets which set low requirements instead of choosy markets such as Japan, the US and Europe.

According to Le Van Duc from MARD, temperate countries such as China, South Korea and Japan have crops from spring to September, so the ministry has advised farmers to harvest products from October to March.

However, as farmers develop crops, they also harvest farm produce at a time when Chinese farmers have their crops, thus leading to an oversupply.

MARD has asked Binh Thuan province, which is the ‘dragon fruit metropolis’, to work with some other localities, to discuss the solutions of growing dragon fruit at different times to avoid massive harvesting and oversupply.

In the long term, he said Vietnamese farmers need to improve the quality of their farm produce so they can enter choosy markets.