Foreign businesses’ associations, representing foreign invested enterprises in Vietnam have warned that their member businesses may leave Vietnam, while domestic associations complain that their proposals have been ignored.

VietNamNet Bridge – Foreign businesses’ associations, representing foreign invested enterprises in Vietnam have warned that their member businesses may leave Vietnam, while domestic associations complain that their proposals have been ignored. 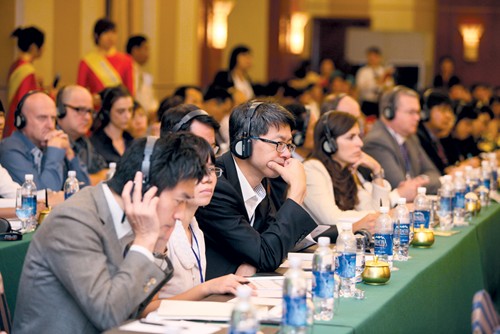 EuroCham has warned that 30-35 European businesses may leave Vietnam in the time to come.

The German Consul General in HCM City – Dr. Hans-Dieter Stell confirmed that he has heard the EU Ambassador talking about the difficulties European businesses, especially the small and medium ones in Vietnam, are facing.

Will the EuroCham’s prediction about the leave of 30-35 percent of European businesses come true? Answering this question, Dr. Hans-Dieter Stell said if the existing legal problems cannot be improved, it would be very difficult for European enterprises to continue their investments in Vietnam.

According to him, what investors are most interested in is where they can work best and make the fattest profits. Once the legal problems and investment environment become the hindrances to their business, the investors would rather make investment in Eastern Europe such as Ukraine or Russia, which allow them to save the transport costs and offer more transparent legal framework.

Therefore, if Vietnam, a far market for European businesses, wants to attract the investors from the region, it needs to make sure that it can offer a by far better investment environment.

Meanwhile, domestic associations have been patiently making complaints and proposals to competent agencies, shouting for the government’s support to overcome the current difficulties. However, not all of their complaints have been replied.

Businesses’ associations, which are considered the bridge linking businesses and the government, in fact, do not have voice and power to lobby for the policies beneficial to their member enterprises.

The city’s businesses’ associations can also make proposals through the Vietnam’s associations in the same business fields.

However, a senior official said that the associations do not represent the large communities of businesses, since the associations still cannot attract high numbers of members. This explains why their proposals have been ignored.

Dr. Dinh The Hien, a well-known analyst, affirmed that businesses should not expect all of their wishes to be satisfied, because businesses’ opinions vary. He cited the sugar story as an example. While the sugar association asked to raise the import tariff on sugar to restrict the imports, the food processors’ association complained that the high sugar prices have made the production costs higher.