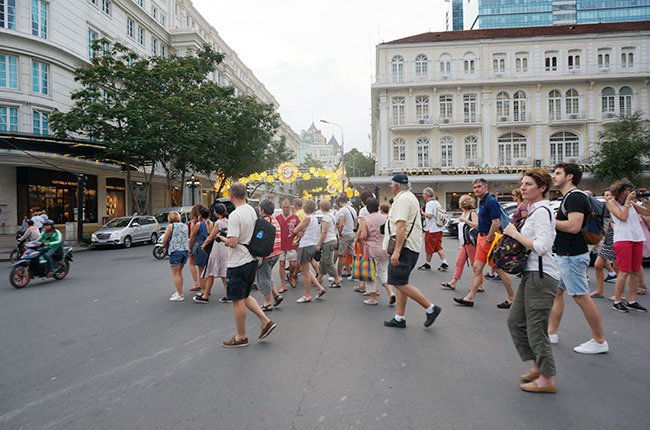 If the goal is reached, Vietnam would have 3 million foreign travelers more this year, or 13 million in total, and 2017 would see impressive growth in the number of tourists.

However, some experts said that the increase in the number of travelers would not have much significance if Vietnam cannot diversify its markets and develop related services.

The revenue from tourism remains modest because of poor management and lack of services.

According to Ky, the zero-dong tour is just one example of the loss of revenue. If Vietnam is not determined to develop human resources and services to serve the task of attracting more travelers, it won’t be able to optimize revenue.

However, it seems that there is still no answer to the question about developing services for tourism. In draft versions of the amended Tourism Law, which is going to be ratified in this National Assembly’s session, there are no details about the issue.

“The plan says we may have 3 million foreign travelers this year, but doesn’t say from which markets they would be and if we have enough tour guides and accommodations to serve them and if the infrastructure items are good enough,” a director of a travel firm said.

Travel firms could not find enough hotels for domestic travelers this summer in tourism points such as Nha Trang because of the high number of tourists.

He went on to say that all cities and provinces cannot anticipate the increase in number of tourists on the local infrastructure system.

Phu Quoc is an example. On the island, many hotel and resort projects have been licensed. However, it is difficult for investors to find workers for the projects due to problems in training policy.

Over 3.2 million foreign tourists visited Vietnam in the first three months of 2017, representing a year-on-year increase of 29 percent, according to the Vietnam National Administration of Tourism (VNAT).