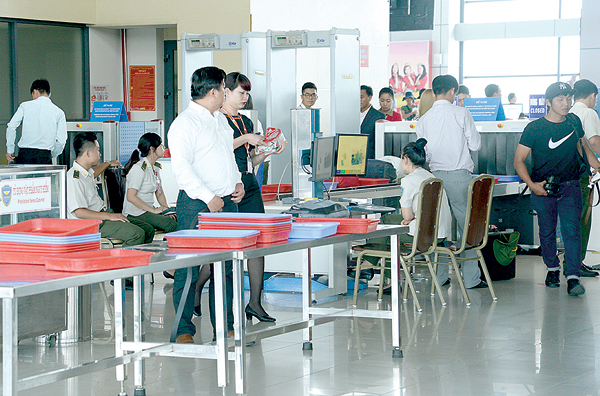 Meanwhile, the investor of the airport – Sung Group – will be responsible for buying and installing X-ray scanners, explosive detectors, magnetic gates, surveillance cameras and preparing infrastructure to ensure security as stipulated by the law.

A contract will be signed between ACV and Van Don International Airport which clarifies the rights and responsibility of each parties, the required cooperation between them and their financial responsibilities in accordance with assigned tasks.

With Option 2, the Van Don Investment & Development JSC, or the investor, will organize the force for aviation security assurance itself.

If the proposal is approved by MOT, this will be an unprecedented case in Vietnam. At present, all the 21 operational airports are under the control of ACV and the security assurance at the 21 airport, including the Da Nang terminal for international passengers built with investments from different sources.

The contract on the implementation of Van Don Airport project under the BOT mode signed between Sun Group and the Quang Ninh provincial authorities stipulates that ‘Sun Group provide aviation security services’.

This means that if ACV undertakes the work of organizing the force for aviation security assurance at Van Don, this may lead to an extension of the BOT contract period because of the adjustment to the original financial plan.

ACV will have to spend more money to maintain the security force at Van Don.

Meanwhile, in the first years of operation, the number of passengers and goods to go through the airport and the revenue from aviation security assurance service remain modest.

ACV and Sun Group will have to discuss the sharing of responsibility, rights and revenue, works which will take much time and will affect the plan to put Van Don Airport into operation by March 2018.

If Van Don organizes the force for aviation security, It will be able to take initiative in operating the airport since it doesn’t have to spend time on negotiations with ACV and other procedural matters.

However, the biggest problem is the investor’s lack of experience in aviation security assurance.

What does ‘airport overloading’ mean for the economy?