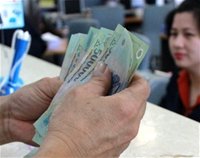 The 2015 finance reports released by about 10 commercial banks show their satisfactory business performance.

With their great advantages in capital and operation scale, four state-owned banks still lead the banking system and have far more profits. VietinBank reported the pre-tax profit of VND7.360 trillion, the highest level in the system.

Of joint stock banks, Military Bank proves to be the best with the reported profit of VND3.22 trillion, followed by Techcombank and VP Bank with VND2.037 trillion and VND1.8 trillion worth of pretax profit.

Meanwhile, mid-tier banks caused a surprise when reporting less satisfactory business results for 2015. Eximbank reported the loss of VND588 billion in the fourth quarter of 2015 because it had to make provision of VND935 billion against credit risks.

Sacombank also reported losses due to the sharp increase in provisions, to VND1.125 trillion from VND187 billion of the same period last year.

According to the State Bank, the drastic measures applied in the last two years have helped reduce the bad debt ratio to 2.72 percent by November 2015 (VND120 trillion).

Bad debts have been settled with three major solutions. First, they were sold to the Vietnam Asset Management Company (VAMC). The solution helped settle 45 percent of total bad debts. The proportion was 48 percent for unlisted banks, while listed banks were less reliant on VAMC with 37 percent.

The other two solutions are using the provisions made by banks against risks and collecting debts.

However, analysts noted that commercial banks still cannot reduce their bad debt burden. About VND243 trillion worth of bad debts, or 9.3 percent of principal, have been frozen at VAMC. This means that VAMC cannot sell the bad debts it has bought from banks, and that the institutions will still have to continue making provisions for VAMC’s special bonds.

If no more bad debt is sold to VAMC in 2016, the total amount of money to pay VAMC’s special bonds would be VND45 trillion.

They have also pointed out that though the bad debt ratio has decreased, the bad debt value has been increasing again.

The high credit growth rate (18 percent in 2015) helped reduce the ratio of bad debt on total outstanding loans. A report showed that in the first nine months of 2015, the fifth-group debt (irrecoverable debts) soared by 24.1 percent compared with the end of 2014 to VND19.662 trillion.