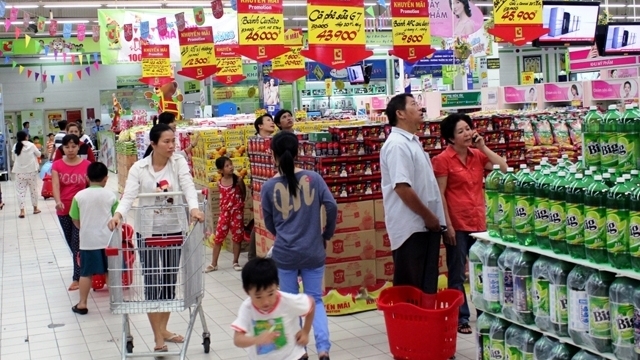 After one year since joining the AEC, Vietnam’s farming sector has not only failed to prosper but even slumped. Meanwhile Vietnam’s agricultural imports from ASEAN have increased continually, with value increasing by 20.2% in the first eleven months of 2015 to over US$1.4 billion, of which fruit and vegetables rose by 84.9% and seafood by 52.2%. Thailand’s fruit exports to Vietnam soared by 88%.

Such a large discrepancy between Vietnam’s exports and imports could be attributed partly to high demand for imported fruit at home and partly to the fact that a large range of imported fruits are considered to be of higher quality than domestic ones, especially when many of Vietnam’s agricultural products are laden with food safety issues. Imported fruit is easy to find at supermarkets in major cities while small

Nguyen Thi Hoa, a resident of Hanoi, says if she has to choose between Vietnamese and Thai fruit, she will definitely pick Thai fruit as even though its prices are a little higher, she can be assured of its high quality and guaranteed safety. Not only consumers but researchers and agricultural policy advisors also affirm that Vietnam could easily become a concave to be flooded by imports because Vietnam’s export structure is similar to that of ASEAN while the competitiveness of many of its products is much lower.

Dr Dang Kim Khoi from the Institute of Policy and Strategy for Agriculture and Rural Development says Thailand is Vietnam’s large competitor on a wide range of agricultural exports such as rice, sugar, animal husbandry, vegetables and seafood. Thai producers have proactively applied high standards to food quality and safety recognised by many countries while Vietnamese producers perform poorly in this area.

That is why Vietnam’s products always trail behind in competition and face the risk that their market share in both Vietnam and a number of ASEAN countries will shrink as consumers’ requirements on food quality and safety are becoming stricter. A prime example is rice. The majority of rice grown in Vietnam is of low quality, only undergoing milling without further processing. Meanwhile on the domestic market, consumers increasingly favour high quality rice from Cambodia and Thailand.

In addition to traditional agricultural products, Dr Khoi also lists other goods such as sugar and chicken that Vietnamese enterprises run the risk of losing to on the domestic market. In the future when import tariffs are cut, Vietnam’s sugar imports are expected to increase. Although the sugar industry has existed in Vietnam for a long time, production is still small scale with high input costs, ensuring Vietnam’s sugar prices are always higher than the world average. Vietnam’s sugar production cost is US$0.63 per kilogram while that of Thailand and Laos is only US$0.38 per kilogram.

Animal husbandry is also no exception, Vietnamese chicken farmers are suffering losses because they cannot compete with imports. In 2014 Thailand’s poultry exports to Vietnam hit more than US$398,000, more than ten times the 2013 figure. In the future when tax cuts come into effect, imports are bound to see stronger increases.

Besides agricultural products, the domestic market is also witnessing an influx of consumer goods from Thailand, Indonesia and Malaysia. In large cities it is not difficult to find TVs, fridges, rice cookers, electric fans, dish and clothes washing liquids and cosmetics originating from Thailand and Malaysia at cheaper prices.

According to the Hanoi Association of Supermarkets, more than 70% of home appliances and 45% of fruit on sale are imported from Thailand. The value of many Thai imports increased sharply in the first eleven months of 2016 such as computers and accessories up 32.7%, home appliances up 37.7%, fruit up 88% meanwhile Vietnam’s export of these goods saw little increase.

Recently the Vietnamese auto market has been inundated with cars assembled in Thailand. Data of the General Department of Customs showed Vietnam imported more than 98,000 fully assembled cars known as CBU, worth a total of US$2.1 billion, of which cars from Thailand accounting for more than 30,000 worth US$569 million, meaning one in three imported car is from Thailand.

The reason behind such high import figures is because the import tariff of CBU cars from ASEAN has reduced from 50% to 40% since the start of 2016, making the costs for importing cars from Thailand cheaper than those from other markets. From now until 2018 when tariffs continue to fall, Thai-assembled cars will have even more advantages on the Vietnamese market. Specifically car import tariffs from

ASEAN will fall to 30% in 2017 and 0% in 2018. Aware of this tax cut trend, many domestic car assembly companies have decided to not invest in new assembly lines anymore and instead completely shift to importing cars from Thailand.

Le Thi Minh Thuy, head of the General Statistics Office’s Department of Trade and Services Statistics, says that this phenomenon is very worrying. An in-depth analysis of import data of each sector shows the great magnitude of challenges domestic enterprises have to face. The value of imported fruit and vegetables, for example, increased by 65.6% in the first ten months of 2016, compared with a modest 2.8% during the same period of 2015. Pharmaceuticals also rose by 20.8% compared with only 0.9% a year ago. As the imports of many products from ASEAN countries, especially Thailand and Malaysia, increased so dramatically, Vietnamese products are facing greater competition and have even been completely overwhelmed on home soil.

Furthermore, Vietnam’s retail market is also under threat of being taken over by ASEAN enterprises. The acquisition of Metro Cash & Carry BigC by two Thai companies has partly reflected Thailand’s ambition to conquer the Vietnamese retail market. Nguyen Dai Thang, CEO of Bao Chau Organic Farm says during the economic integration process, market conquest is critical to the existence of an enterprise. The retail market plays an important role because when an enterprise has a large market share and distribution system of its own, it can proactively decide on the quantity and types of products to be put on sales on its distribution channel.

When Vietnamese distribution channels fall into the hands of foreign enterprises, Vietnamese producers will face more difficulty in selling their products. Dinh Thi My Loan, chairwoman of the Association of Vietnamese Retailers, openly admits that foreign retailers are stronger than those found in Vietnam in terms of financial capacity, brand and human resources so they excel in market development and corporate management. If Vietnamese companies want to compete with their foreign rivals on the domestic market, they have to make substantive changes such as enhancing professionalism, applying advanced technology in management and fostering cooperation and alliance to develop a long-term strategy.