Big dreams for the banana industry

VietNamNet Bridge - Banana prices have seen sharp increases in the last 30 years, with an estimated market value of $15 billion per annum.

VietNamNet Bridge - Banana prices have seen sharp increases in the last 30 years, with an estimated market value of $15 billion per annum. 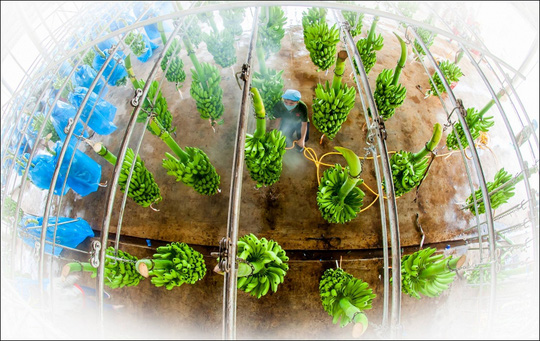 At Hoang Anh Gia Lai shareholders’ meeting, president Doan Nguyen Duc said one hectare of bananas brings revenue of VND1.9 billion, much higher than that brought by sugar cane. It is estimated that the group earns VND2.3 billion from fruit, and bananas account for a large proportion.

However, despite the great potential, Vietnam still cannot develop an effective banana industry.

Banana have one of the largest fruit growing areas in Vietnam, accounting for 19 percent of total fruit-tree cultivation, and the highest output, about 1.4 million tons a year. However, banana has never been considered a key fruit tree and has never been included in local fruit development plans.

The link between farmers and enterprises is loose: farmers don’t have information about the market, while enterprises have to collect products from many different sources with no clear origin.

Several days ago, 20 tons of bananas from Hung Yen received customs clearance at Vladivostok port in Russia. Globally, the company which imported Vietnam’s bananas noted that bananas have good prices while the quality is not inferior to any product from other countries. He said that many companies had contacted Global to buy Vietnam’s bananas.

The demand for bananas in Russia’s eastern areas is very high, while some Russian companies said they can pay 70 percent or 100 percent of the value of consignments in advance.

The Manila Times last year quoted experts saying that Vietnam may become a big rival for the Philippines’ banana industry. However, Vietnam will need to industrialize banana production. It needs to start the process by developing varieties favoured in international markets instead of some traditional varieties.

An expert said that it is necessary to improve varieties to create products with high yield which can be preserved for long shipping time.

It is estimated that 30 percent of bananas going to the EU market are refused because of the lack of aesthetics. Therefore, there must be officers in charge of ensuring quality control in all phases of the production chain, including cultivation, harvesting, cleaning, labeling and packing.

Hand&Hand, a farm produce company from South Korea, is developing a banana farm in Can Tho. It plans to have a farm with an area of 300 hectares at least in Vietnam by 2022.