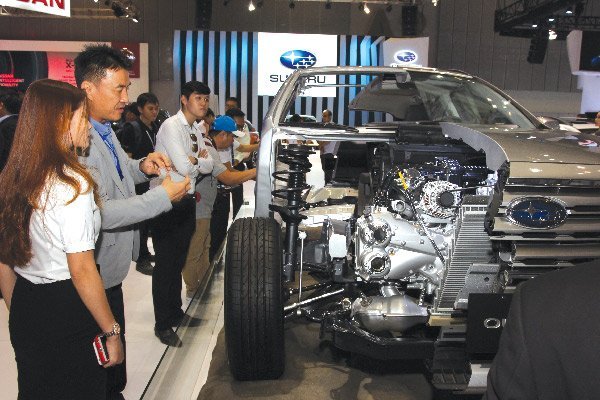 Toyota Vietnam reported that it exported $34 million worth of car parts in the first half of the year, an increase of 13 percent compared with the same period last year.

In 2017, the manufacturer from Japan earned $64 million from car part exports, an increase of 5 percent over 2016. This was record high export turnover gained since its export center opened in 2004.

According to Nguyen Thi Xuan Thuy from the Vietnam Institute for Industry & Trade Policy and Strategy (ITPS), the car part export value is higher than the import value by $1 billion. The export items are made with ‘relatively high technologies’ such as ignition wiring harnesses, gear boxes and safety air bags.

A report of the General Department of Customs (GDC) showed that the export turnover of transport vehicles and spare parts in 2017 nearly reached the $7 billion threshold, an increase of 15.4 percent over the year before.

In the first six months of the year, the exports brought $4.03 billion, up by 19.4 percent. The car part export turnover in recent years has surpassed turnover of some product items which Vietnam has strength in, now ranking eighth among the most valuable export items.

The buyers of transport vehicles and spare parts from Vietnam include countries with developed automobile industries, such as Japan which imported $1.17 billion (up by 15.1 percent), and the US, which imported $625 million (27.4 percent). Some other markets including Thailand, Germany, China and South Korea have also increased imports from Vietnam.

Though transport vehicles are included in the statistics, observers note that the majority of the exports are automobile parts. Domestically assembled cars have production costs   20 percent higher than CBU cars made in other regional countries and therefore are uncompetitive.

According to Thuy, the exporters are mostly FIEs. They set up factories in Vietnam and turned Vietnam into a production base from which car parts are brought to the world.

Japanese and Taiwanese manufacturers, such as MTEX, FAPV, Nissei, Nidec Tosok, Furukawa and Cobal Yamada, have been present in Vietnam for a long time and provide car parts to the world’s leading automobile manufacturers, but do not sell in the domestic market.