The oil spills on the coast of Quy Nhon city has caused serious damage to the environment and fishermen. To quickly find the cause and prevent further damage, the local government has used divers.

VietNamNet Bridge - The oil spills on the coast of Quy Nhon city, Binh Dinh province has caused serious damage to the environment and fishermen. To quickly find the cause and prevent further damage, the local government has used divers.

Thousands of liters of oil spilled on Quy Nhon beach 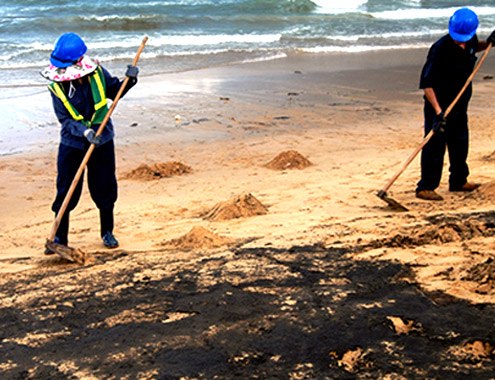 Collecting oil on the beach of Quy Nhon.

Mr. Dang Trung Thanh, deputy director of the Department of Environment and Natural Resources of Binh Dinh province, told a local newspaper this morning that along with assisting people to deal with oil spills, the provincial authorities had mobilized tens of divers to search for the source of oil spills.

"Through field surveys, we believe that this is used oil and it comes from the sea," Thanh said.

According to Binh Dinh authorities, oil scum concentrated on the passage to Quy Nhon Port but they could not find the oil source there. Oil has not only penetrated into the fish breeding areas but also the beach of Quy Nhon, hindering local people and tourists from swimming.

If the oil spills continue for a few more days, Binh Dinh will ask for the assistance of the Da Nang-based National Center for Oil Spill Response. 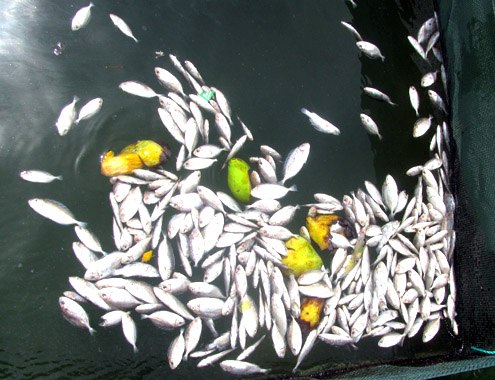 Fish died because of oil.

On the afternoon on July 8, Quy Nhon mobilized over 350 young people and workers of the local urban environment and hygiene company to collect oil on the coast. By noon on July 9 they collected hundreds of bags of curdled oil and dozens of barrels of liquid oil.

Mr. Vo Dinh Tam, Director of Binh Dinh Department of Aquaculture Department, said 79 fish farms in Hai Cang Ward, Quy Nhon were affected by the oil spill. Several cages had over 50 percent of fish or shrimp dead and the remaining are getting weak.

The local authorities have guided fishermen to zones and to prevent oil spilling into fishing cages and save fish.