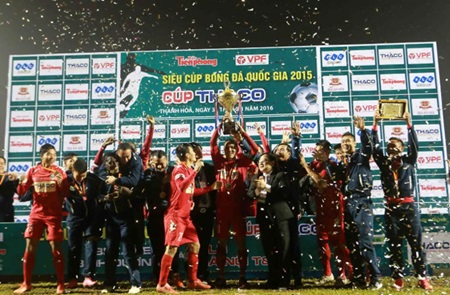 With this victory, Binh Duong has become the first team to ever win three titles in a football season: V.League 1, National Cup and Super Cup. Ha Noi T&T were the runners-up of these events.

Binh Duong also became the first Vietnamese team to win the national premier league for the fourth time. Their previous titles were in 2007, 2008 and 2014.

"Our team didn't play well in this match because of the football ground. However, we were lucky enough to have two goals to win the title," said coach Nguyen Thanh Son of Binh Duong.

"We made two big errors in the match, however, I was still satisfied with my players," said coach Phan Thanh Hung of Ha Noi T&T.

The Super Cup match has been held annually since 1999, with 10 football clubs having been crowned. Song Lam Nghe An was the most successful, lifting the trophy four times, including winning three consecutive titles from 2001 to 2003.

As stipulated, the two teams play only 90 minutes, with no extra time or further rounds. A penalty shootout is to be held in case the match ends in a draw.